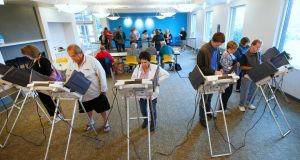 People cast their ballots on electronic voting machines on the first day of early voting in Provo, Utah, this week. Utah’s six electoral votes, normally a safe bet for the Republicans, are up for grabs in this year’s election because of the strong showing by independent candidate Evan McMullin. Photograph: George Frey/Getty Images

Utah is one of the last places you expect to find a Republican candidate for the White House 12 days before election day.

The deeply conservative western state has supported only Republicans since 1964, and its six electoral votes are normally such safe bets for the Republicans that neither of the main parties bother devoting much time, or money, to it.

But, on Thursday night, instead of blitzing the vital swing states of Florida, Ohio or Pennsylvania, Donald Trump’s running mate, Mike Pence, found himself in a hall in Salt Lake City, desperate to stem the flow of support from the Republican ticket to a little-known independent candidate whose rise in the polls has rocked the Trump campaign.

“There are only two names on the ballot who have a chance to be president of the United States, ” Pence told a crowd of cheering loyalists, taking aim at Evan McMullin, the 40-year-old former CIA agent and congressional aide who is running neck-and-neck with Trump in some polls.

“A vote for any candidate other than Donald Trump, bottom line, is a vote to make Hillary Clinton the 45th president of the United States, so it’s time to come home. It’s time for Republicans to come home.”

Pence, the governor of Indiana, is far more popular in Utah than Trump, whose dubious conservative credentials, anti-immigrant rhetoric and conduct on the campaign has alienated many in the state’s large Mormon population.

In Salt Lake City, Pence is given a hero’s welcome from the overflow crowd at the Infinity Event Center as he attacks Clinton and warns, without ever naming McMullin, of the perils of third-party candidates.

“Hillary belongs to Isis,” yells a woman at the back of the hall.

Despite the defiant mood inside, many in the crowd admit they are concerned about a split in the local conservative vote.

It reflects a broader anxiety among Republicans, here and elsewhere, about the prospects for unity in their party if Clinton wins on November 8th.

“I didn’t fall for the divide-and-conquer bait that they put out,” says Shirley Robins, a pensioner who came along to support Pence. “You know, Hitler said it was much easier to take over Germany after he had divided the people.”

Robins believes a Clinton victory would put the Republicans in a similar position to the Democrats in the Reagan years.

“It will take them a few years to get back on track. But I have faith in the American people.’

Nevertheless, she is furious with conservatives who are jumping ship to McMullin, who she feels “might be a plant from the Democratic side”.

That’s not an isolated view outside the hall.

“It’s clear that he [McMullin] is just there to take votes away from Trump so that Hillary can cheat her way in,” says local man Justin Vance (39). “It’s just another ploy. He is a CIA veteran, he used to work for Goldman Sachs as a banker, and we all know that those ties are tight with Hillary.”

Does he believe McMullin’s candidacy is an elaborate set-up?

As we speak, a middle-aged man walks up and down the path with a sandwich board showing images of foetuses. Someone yells “F**k Trump” from a passing car.

In his speech, Pence tailors his message to Utahns’ concerns, warning that Clinton is hostile to guns and religious liberty and in favour of expanding abortion rights.

There are notable Republican absentees from the hall, however, among them governor of Utah Gary Herbert, US senator Mike Lee and two members of US Congress, Jason Chaffetz and Mia Love.

All four criticised Trump after a video emerged of him bragging about sexual assault.

“They’re missing the boat,” says Cindy Bekale, a local blogger and former screenwriter, of the Republicans who reject Trump. “It’s really important to be a nationalist right now.”

Bekale doesn’t believe a Trump defeat would be followed by a formal split, but she does see hers as a party in transition.

“If the result is that Hillary is the president, I think we should remain peaceful, but . . . this movement will continue.”

For local author Tedi Wixom, the split in the higher echelons of the Republican party is symbolic of a divide between career politicians “who want to have the power and the prestige but couldn’t care less about us ordinary people” and those who genuinely stand for right-wing values.

“They need to put their big-boy pants on and stop crying,” she says. “People don’t use their brains. Here, in Utah, they’re like sheep.”

Her party is “a shambles”, Wixom says despondently, and she worries that it could “roll over and die”.

But Neil Schulz, who is handing out Trump yard signs beside her, doubts it could implode.

“I think [House speaker] Paul Ryan and [chairman] Reince Priebus will probably hold things together. They’re not recognising that the people are speaking loud and clear. My hope is that they’ll listen.”