Star Wars: Force Awakens has world premiere in US 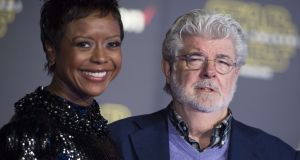 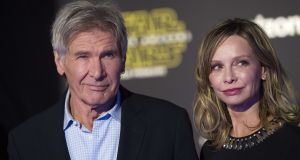 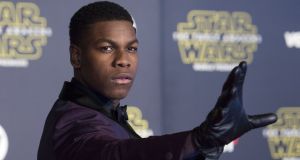 An army of Stormtroopers plus C-3PO and R2D2 were among the early arrivals at the world premiere of the highly-anticipated new Star Wars movie in Los Angeles.

A long stretch of Hollywood Boulevard was closed to traffic for days ahead of the premiere of Star Wars: Episode VII - The Force Awakens and fans have been camping outside the TCL Chinese Theatre for more than a week in anticipation of the release of the film.

C-3PO and R2D2 walked down the red carpet together as fans seated in bleachers roared in appreciation. C-3PO could be seen with a red arm, a source of much mystery as to what has happened to him.

Peter Mayhew, who plays Chewbacca in the series, stepped out of his car with the help of a lightsaber cane and posed for photographs with Anthony Daniels, who plays C-3PO in the films.

The droid BB-8 rolled down the red carpet under the huge white tent erected in front of the three cimemas on Hollywood Boulevard where the film will be shown.

The plot of the movie is a closely-guarded secret and each trailer and snippet of footage has sent fans wild with excitement and speculation.

The Force Awakens opens in Ireland on Thursday.

Star Wars creator George Lucas was spotted laughing and chatting with director and co-writer JJ Abrams on the red carpet.

Lucas has already seen the movie and has reportedly given it his seal of approval.

Dressed in a navy jacket and checked shirt, he said: “It’s a film about families and what one generation leaves behind another generation has to deal with.”

He added: “I started off wanting to do a film for young people who were going through adolescence, with mythological themes and spiritual themes. That is what resonated with people.”

Harrison Ford, who returns to his role of Han Solo, arrived at the premiere in a dark suit and said making a Star Wars movie now is a far cry from making one in the 1970s.

“In the 70s nobody knew what to anticipate, nobody had seen anything like it, now we have to live up to what the first films delivered,” he said.

But he said he did not feel too much pressure: “It’s not my fault, we can blame it on JJ. I just work here,” he said.

StarWars Oscar winner Nyong’o arrived on the red carpet in a dark floor-length sparkling gown, saying: “I thought I would bring the galaxy with me.”

The actress, who plays Maz Kanata, said the premiere was an overwhelming experience. “I don’t think you can really fully appreciate it in this moment, I feel so lucky and blessed and I’m geeking out. I feel really happy,” she said.

Driver, best known for his role in Girls, plays Kylo Ren in the film. He said his action figures mean he already has Christmas presents sorted: “I’m set for this year and the next couple of years. Everybody gets a picture of me.”

He denied he stayed in character during the shoot but said he did sometimes keep his helmet on in between takes.

“Sometimes scenes take you places you weren’t expecting and it seems better to leave the mask on but sometimes you just want to take it off,” he said.

He added that working with the original cast was the highlight of being a part of the movie, saying: “There was something that ground it in the movies I grew up watching and watching them have this youthful ambition for making it good, they couldn’t be more excited to be there.”

Andy Serkis, who plays Supreme Leader Snoke, refused to reveal anything about his character as he arrived at the premiere.

“Everything has been shrouded in secrecy because nobody wanted to spoil it for anybody, everybody wants to know but also wants to wait and see the movie,” he said.

Game Of Thrones star Gwendoline Christie, who plays Captain Phasma, arrived in a floor-length pale grey gown with a black bow detail at the neck, while Daisy Ridley, who plays Rey opted for a sheer white halterneck gown with a tiered skirt.

John Boyega, who plays Finn, posed for pictures in a shimmering maroon tuxedo jacket with a black bowtie and black leather gloves.

Abrams, who has previously directed two Star Trek movies and an instalment in the Mission Impossible franchise, said he was not looking to put his own mark on the Star Wars film, but instead wanted to honour the story.

“I don’t look at the things I do from a vantage point of putting a stamp on it, I’m trying to service the master of the stories and the characters,” he said.

“It feels like it has been three years of a lot of work but at the same time it’s like, ‘How did this happen so quickly?’.”

Director Steven Spielberg, who has known Abrams since he was a teenager, said he was very proud of what he had accomplished.

He added: “The cultural event of the first Star Wars was a seismic shock wave that went round the world and never went away, no franchise in the history of motion pictures has been as incendiary and enduring as Star Wars.”