Stanford judge launches campaign to fight efforts to unseat him 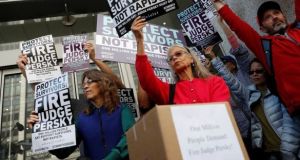 The judge in the Stanford sexual assault case has launched a campaign to fight the high-profile effort to unseat him, declaring that he has a “reputation for being fair to both sides” in his first public comments on the controversy.

Judge Aaron Persky, who received widespread backlash for his sentencing of former Stanford swimmer Brock Turner, is campaigning to stay in office and has launched the website RetainJudgePersky.com where he states that he is a strong advocate for “judicial independence”.

“I took an oath to uphold the Constitution, not to appease politicians or ideologues. When your own rights and property are at stake, you want the judge to make a fair and lawful decision, free from political influence,” he wrote on the site.

The northern California judge’s statements mark the first time he has directly addressed the well-funded initiative to recall him from office over his light sentencing of Turner, who was convicted of multiple felony counts of sexual assault. Mr Persky is also soliciting donations on the site.

Mr Persky sentenced the 20-year-old athlete to six months in county jail, which is lighter than the minimum of two years in state prison prescribed by law.

Turner was caught sexually assaulting an unconscious woman by a dumpster outside an on-campus fraternity party, but throughout the trial, he argued that the encounter was consensual.

Turner, who went to jail in June, is scheduled to be released on Friday after serving only half of his sentence. In California, inmates with good behavior are often released early.

The case made headlines across the globe after the victim released a powerful impact statementdetailing the trauma of the trial.

Michele Landis Dauber, a Stanford law professor and family friend of the victim, subsequently organised a formal initiative to remove Mr Persky from office, arguing that the Santa Clara County judge failed to treat assault as a serious crime.

Prosecutors later removed Mr Perskyfrom a new sexual assault case, saying they lacked confidence in him. Last week, the judge took the unusual step of removing himself from all criminal cases and transferring to civil court, but Ms Dauber said the recall campaign would continue.

The judge’s opponents have argued that he has repeatedly been too lenient towards men convicted of sex crimes and violence against women including when he presided over a sexual assault case in civil court.

But Mr Persky’s supporters, including public defenders, former judges and law school professors, have argued that the recall is misguided and that judges should not be removed from office for a single decision. His defenders further fear that the push for harsher sentencing could lead to more severe punishments for low-income defendants and people of colour disproportionately caught up in the criminal justice system.

On Monday, lawmakers approved legislation inspired by the Turner trial that seeks to make prison a mandatory punishment in cases of sexual assault involving unconscious victims.

On his website, Mr Persky notes that he has served in public office for nearly 20 years, first as a criminal prosecutor.

‘Reputatoin for being fair to both sides’

“I prosecuted hate crimes and sexually violent predators,” he said. “As a judge, I have heard thousands of cases. I have a reputation for being fair to both sides.”

Mr Persky, who has served as a judge for the past 12 years, noted that he graduated Phi Beta Kappa from Stanford and that he is married with two children.

The site also features links about judicial independence, including one letter from retired judges defending Mr Persky, which says judges may be recalled for illegal or unethical conduct, but that “the essence of judicial independence is that judges must be able to make decisions without fear of political repercussions”.

Mr Persky has raised $3,600 in contributions for his campaign, according to the Mercury News.

Ms Dauber said the recall campaign has raised more than $250,000 in pledged funds and cash.

1 Covid-19 incidence in the Republic set to surpass that of UK
2 Coronavirus: Non-essential travel from US set to be banned within days
3 ‘Our hearts are broken’ – implications of fresh lockdown sink in
4 New call centre at Dublin Airport to track arriving passengers
5 German nudist chases wild boar that stole laptop at Berlin lake
Real news has value SUBSCRIBE