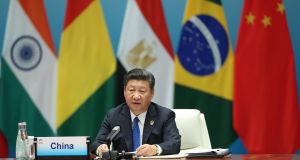 Chinese president Xi Jinping: “Facts have proved time and again that eventually, the Korean peninsula issue can only be solved through peaceful means, such as dialogue and consultation.” Photograph: Wu Hong/EPA

China has called for diplomacy to resolve the nuclear crisis on the Korean peninsula, saying talks were the only option for ending the standoff, after telephone consultations with US president Donald Trump and Germany chancellor Angela Merkel.

“Facts have proved time and again that eventually, the Korean peninsula issue can only be solved through peaceful means, such as dialogue and consultation,” President Xi Jinping told Dr Merkel, in remarks carried by the Xinhua news agency.

“The international community needs to make joint efforts to achieve a peaceful solution of the issue,” Mr Xi said.

North Korea staged its sixth and most powerful nuclear test last Sunday when it detonated what it claimed was a hydrogen bomb capable of being carried by an intercontinental ballistic missile, a move that Washington said showed that North Korean leader Kim Jong-un is “begging for war”.

The conversation with Dr Merkel was the latest high-level phone call by Mr Xi as part of China’s efforts to act as honest broker in the dispute. Earlier this week Mr Xi spoke to Mr Trump, who said that military action was “certainly an option”.

In China, opinions are mixed about North Korea. There is a widely held view that the US and South Korea are acting like bullies, especially as it holds annual joint military exercises that Pyongyang believes are about orchestrating regime change.

However, many people believe that North Korea is insulting China by staging the nuclear tests in the face of repeated calls by the Beijing leadership to stand down.

After fighting alongside North Korea in the Korean War (1950-53), China is the isolated state’s ideological ally and has done much to support the economy in the years since the collapse of its previous main supporter, the Soviet Union, in the early 1990s.

Beijing does not want regime change in North Korea as the collapse of Mr Kim’s government would most likely lead to a US-led administration on China’s borders.

The tone from North Korea’s neighbours such as Russia, Japan and South Korea has softened, as they are keen to see tensions ease because they will suffer most if the standoff escalates into conflict.

The United Nations has imposed increasingly tough sanctions to squeeze the nuclear programme, but calls are growing to step up embargoes to include oil and other essential goods, which could have a serious impact on civilians.

China fears a massive influx of refugees into its territory if sanctions start to bite among the general population.

At the same time, the Chinese government has been angered by the North’s nuclear weapons programme, which has raised tensions in the region.

The Chinese government has consistently called for dialogue on North Korea and Dr Merkel appeared to back this approach in Germany’s Bundestag lower house of parliament earlier this week.

“North Korea’s nuclear tests are a flagrant violation of all international conditions,” she said. “I say clearly and in the name of the whole government: there can only be a peaceful, diplomatic solution.”

Dr Merkel said Germany would strengthen co-ordination with China to find a solution through dialogue.

China’s foreign minister Wang Yi said Beijing supported the UN Security Council’s call to bolster its response to testing by the North. The US has proposed a draft resolution to seek UN sanctions that would ban all oil and natural gas exports to North Korea.