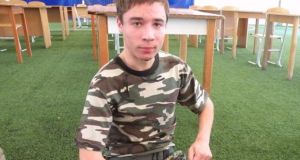 Pavlo Hryb: vanished during a day trip to Belarus last month and resurfaced in a Russian jail facing terrorism charges.

Ukraine has demanded the immediate release of a teenage blogger who vanished during a day trip to Belarus last month and resurfaced in a Russian jail facing terrorism charges, after allegedly being abducted by Moscow’s FSB security services.

A lawyer for Pavlo Hryb has asked the European Court for Human Rights (ECHR) to urgently ensure the safety of her young client, who disappeared after visiting the Belarusian city of Gomel on August 24th to meet a girl he had met online.

Belarus initially claimed to have no information about Mr Hryb (19) but his father, a former border guards officer, suspected that his son had been targeted for his online criticism of the Kremlin’s aggression against Ukraine, and was the latest of several of the country’s citizens to vanish before reappearing behind bars in Russia.

Officials at Ukraine’s foreign ministry said the FSB confirmed on Thursday that Mr Hryb was now in detention in the southern Russian city of Krasnodar on suspicion of terrorism.

The ministry said that it “expresses a strong protest to Russia and demands that it provide urgent access for Ukrainian consuls to the detainee, immediate information about the place, reasons and circumstances of his detention . . . and immediately returns him to his homeland.”

Russia has not confirmed or denied that it is holding Mr Hryb.

‘Threat to his life’

Lawyer Yevgeniya Zakrevskaya said she had appealed to ECHR because she believed “the Russian Federation is now directly abusing the rights of Pavlo Hryb, such as the right to freedom and the right not to [suffer] torture, and there is a direct threat to his life.” Mr Hryb reportedly takes daily medication for a chronic health problem.

She also said Belarus would be considered complicit in Mr Hryb’s abduction if it did not help to explain how Mr Hryb disappeared in Gomel after arriving by bus from his home city of Chernihiv, 130km to the south in Ukraine.

A Ukrainian television station says the girl who Mr Hryb planned to meet in Gomel is a 17-year-old from the Russian city of Sochi.

In an interview with the TSN channel, the girl, who was not identified, reportedly said she was also being investigated by FSB agents, who had forced her to lure Mr Hryb to a meeting in Gomel.

Halya Coynash of Ukraine’s Kharkiv Human Rights Protection Group said: “There are serious questions to be asked regarding the Belarusian authorities’ apparent complicity in this abduction, as well as grave concern about Russia’s motives for holding the young man incommunicado for so long.

“The worst fear must be that the delay was in order to produce the same type of ‘confession’ which the FSB or Russia’s Investigative Committee have tortured out of other Ukrainians it held incommunicado.”

The fate of Mr Hryb has added to regional tension at a sensitive time, as Ukraine keeps a close eye on preparations for major joint Russian-Belarusian war games later this month.

When a Ukrainian diplomat complained recently about Minsk’s lack of co-operation in Mr Hryb’s case, the Belarusian foreign ministry said “there’s no reason to shift the blame if a 19-year-old’s parents and his own country’s authorities didn’t keep track of him”.