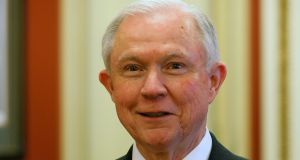 Senator Jeff Sessions: has come under criticism for his hardline anti-immigration stance, but has vehemently denied being racist. Photograph: Jonathan Ernst/Reuters 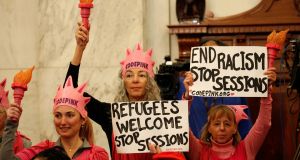 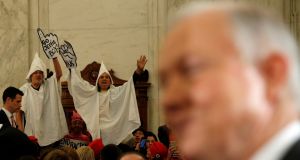 Senator Jeff Sessions sought to distance himself from Donald Trump’s election rhetoric by promising to recuse himself from any prosecution of Hillary Clinton if confirmed as attorney general and saying he had no reason to doubt Russia sought to influence the US election.

In the first of what could be a combative series of confirmation hearings, the Alabama Republican also rejected the notion that Muslims should be denied entry to the US and said waterboarding was illegal as an interrogation technique – both stances that contradict Mr Trump’s campaign platform.

Mr Sessions’s efforts to step back from the campaign’s incendiary rhetoric and Mr Trump’s more contentious policies could set a template for other controversial nominees, who face questions about ties to Russia and hold views on climate change and regulation frequently outside the Washington consensus.

Ahead of the hearing, Mr Sessions (70) was expected to find most difficulty with Democratic grilling over a history of alleged racially insensitive remarks.

In 1986, his nomination to a federal judgeship collapsed after lawmakers heard testimony that he had referred to a black prosecutor as “boy” and said that he thought the KKK was fine “until I found out they smoked pot”.

Mr Sessions rejected what he called a “caricature of me from 1986” that had depicted him as a racist and said he had learned from the inequities of the pre-Civil Rights era. “I know that was wrong,” he said. “I know we need to do better. We can never go back.”

Mr Sessions acknowledged making comments during the race that “could place my objectivity in question” in regard to investigations involving Mrs Clinton. This included calling for a special prosecutor to probe her use of a private email server as secretary of state.

Both the president-elect and Mr Sessions, his first Senate supporter, assailed Mrs Clinton, with Mr Trump leading chants of “lock her up” at rallies.

“The proper thing to do would be to recuse myself from any questions that involve Secretary Clinton,” he told the hearing. “We can never have a political dispute turn into a criminal dispute.”

The hearings were interrupted several times by protesters attacking Mr Sessions for his record on race.

But Mr Sessions struck a conciliatory note, siding with Democrats – and many Republican Senate colleagues – by contradicting the president-elect’s position on whether the Russian government had hacked the US election.

Mr Sessions said he was convinced the supreme court decision enshrining abortion rights was wrong. But he promised to uphold it as well as a measure permitting same-sex marriage, saying both deserved “respect” as settled law.

Rex Tillerson, Trump’s nominee for secretary of state, appears most in danger of facing dissent from Republican ranks at the Senate hearings over a close relationship he has built during his work as chief executive of the Exxon oil corporation with Vladimir Putin, the Russian president.

John McCain, the hawkish Arizona senator and former presidential candidate, has said that while he may support Mr Tillerson’s nomination, “there’s also a realistic scenario that pigs fly”.

Mr Tillerson’s confirmation hearings are scheduled to begin on Wednesday, when they may be conveniently overshadowed by Mr Trump’s first press conference since July.