Chicago will not allow federal troops in the city, mayor announces 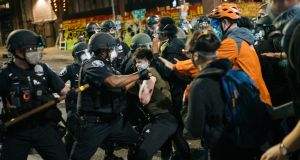 Protests, in places violent, were see in many US cities over the weekend as demonstrations reignited at the presence of federal troops. Riots were declared in Portland, the centre of a new wave of protest, and in Seattle amid teargas, fires, hurled stones and bottles. In Austin, Texas, a man was shot to death on Saturday evening when he approached a vehicle and a person inside opened fire, the police reported.

Weeks of violent clashes between federal agents and protesters in Portland, Oregon, galvanised thousands of people to march through the streets of US cities on Saturday, injecting new life into protests that had largely waned in recent weeks.

One of the most intense protests was in Seattle, where a day of demonstrations focused on police violence left a trail of broken windows and people flushing pepper spray from their eyes. At least 45 protesters had been arrested as of early evening, and both protesters and police officers suffered injuries.

Amid complaints from Democratic mayors, Chad Wolf, the acting secretary of homeland security, said on Fox News that the Portland experience of what he called baseball-bat-wielding protesters was “very different” to places such as Chicago, Albuquerque or Kansas City, where it’s “normal criminal activity” such as drug dealing.

Thousands of demonstrators marched in groups around Portland, some yelling “Feds go home!” in response to the Trump administration’s decision to send federal agents there in late June. The police said protesters used power tools to try to cut through the fence of the federal courthouse and pulled a section down. At one point, protesters lobbed fireworks and other projectiles toward federal agents there, who fired back with tear gas. A riot was declared, and the police reported an unspecified number of arrests.

“What we see in Portland is a city, at least in certain hours at night, completely out of control,” said Mr Wolf.

Craig Gabriel, an assistant US attorney in Oregon, said at a news conference that federal agents had arrested 60 people at protests in Portland and were pursuing charges against 46 of them.

In Seattle, a riot was declared after thousands of protesters battled with police: throwing rocks, bottles, fireworks and other explosives. Police used pepper spray and flash bangs to disperse the crowds. Officers retreated to a precinct amid large demonstrations in the Capitol Hill area, which earlier protests had declared a police-free autonomous zone. Police chief Carmen Best told reporters she hadn’t seen any federal agents on the streets. The Seattle police said they had made “dozens” of arrests and that 21 officers had been injured.

Other protests flared in New York, Los Angeles, Oakland, Omaha and Nebraska, among other cities. Police in Aurora, Colorado, said on Twitter that a vehicle drove through a crowd of protesters, one of whom fired a gun and hit another protester.

Democratic mayors are pushing back. Chicago will not allow federal troops in the city or tolerate unidentified agents detaining protesters on the street, said mayor Lori Lightfoot on CNN. “If they cross that line, we will not hesitate to use every tool at our disposal to stop troops and unwanted agents in our city,” she added.

The FBI, DEA and other agencies have worked with Chicago’s local law enforcement to help support various efforts, including violence, under the management of the local US attorney, Lightfoot said, in explanation of the nature of the federal help in the city.

Kansas City, Missouri, mayor Quinton Lucas said on Fox News that he faced a “significant” law-enforcement challenge but not one stoked by the Black Lives Matter movement or new anti-police sentiment.

“We have an increase in homicides, more activity relating to illegal gun trafficking in our communities, and enhanced and increased gang activities,” Lucas said. “We want to find a multifaceted approach to how to address it, but we recognise just more patrols isn’t necessarily the way.” – Bloomberg/New York Times