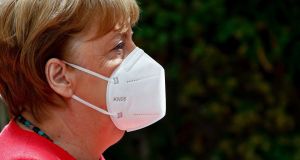 The novel coronavirus may decide who CDU delegates choose next December as successor to Angela Merkel as chancellor. Photograph: François Lenoir/AFP via Getty Images

First the Covid-19 lockdown scrapped plans for an April gathering to choose a new leader of Germany’s ruling Christian Democratic Union (CDU); now the virus may decide who delegates choose next December as a successor to Angela Merkel.

The steady pandemic path of the chancellor and her grand coalition in Berlin has had a disproportionately positive effect on the CDU, pushing the senior coalition partner five points beyond its 2017 election to a barnstorming 38 per cent in polls.

That success has rubbed off on some CDU figures more than others. Federal health minister Jens Spahn – until now seen as a leadership outsider – is now being pushed as a possible front-runner.

Laschet has had a bad pandemic, leading the vocal charge to loosen the lockdown before his credibility was hit by a virus surge in his state’s meat factories.

Merz was runner-up in the last CDU leadership race in December 2018 and, until the pandemic struck, was seen as another strong replacement for the luckless party leader Annegret Kramp-Karrenbauer.

But the pandemic has sucked the oxygen out of the Merz media campaign, while a ban on public events has robbed the former politician of a platform to rebuild his profile.

A similar fate has befallen Norbert Röttgen. A former environment minister, he has no cabinet post to keep him in the public eye and is now seen as the least likely to succeed.

Officially the CDU has paused its leadership campaign, with all leadership hopefuls insisting that public health have priority over political interest or personal ambition.

The jostling continued a little more discreetly than before until Friday, when Spahn supporters tore away the thin veil of discretion. In co-ordinated interviews, they insisted the three favourites to date – all over 50 – would hinder a generational shift that only the 40-year-old health minister could deliver.

Others suggest Spahn’s “outstanding work” as health minister in the pandemic has made him the first among equals.

“I don’t see Jens Spahn in the reticent role he has chosen for himself but clearly at eye level with the other candidate,” said Armin Schuster, a senior CDU figure.

Spahn has remained silent for now but, in the past, has made no secret of his impatient ambition.

Previous perceived impediments – his youth, lack of cabinet experience, and his homosexuality – have, with time, diminished as issues. But two obstacles still loom large in his pursuit of the CDU leadership.

First, in February he entered a political alliance with Armin Laschet, agreeing to keep out of the race if Laschet, as new CDU leader, made him his deputy. With Laschet’s star sinking, it remains to be seen how Spahn  can extricate himself without political blowback.

The first move in this direction came when Bundestag president Wolfgang Schäuble, an influential CDU grandee, dispensed his blessing on Spahn for having”the will for power”.

The other obstacle is Markus Söder, the Bavarian minister president. Once dubbed the prince of darkness for his love of political intrigue, the 53-year-old has transformed himself during the pandemic into a heavyweight leadership figure.

As head of the Bavarian CSU he cannot run for the leadership of its CDU sister party, but his allies say his eye is on the chancellery.

In one scenario doing the rounds in Berlin, Spahn would become CDU leader, Söder would be fielded next as Merkel’s chancellor successor while Laschet would be fobbed off with the presidency if he withdraws from the race. Chief problem in this scenario: two previous CSU chancellor bids failed because Bavarians don’t play well in the rest of Germany.

Yet Spahn loyalists insist the job-share could work: their man and Söder share a pronounced taste for power and progressive conservative politics, they say, compatible with the most likely coalition partner, the Greens.

Five months remain until the CDU chooses its next leader but, just as Covid-19 has reshaped the world of work and the high street, the novel coronavirus appears poised to scramble Germany’s body politic.