Trump: Giving a narcissist the US presidency

"Believe me" has become something of a catchphrase for Donald Trump throughout the 2016 election season. Video: Enda O'Dowd 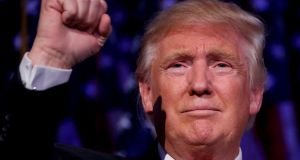 Narcissists’ Chief of Staff: President Donald Trump is convinced that people admire him even when it’s pretty obvious to the rest of the world that people do not. Photograph: Reuters/Carlo Allegri

Narcissism, a word often applied to Trump, is a big step up from vanity. In the original Greek myth, Narcissus admired his own reflection in a pool until he died. Narcissists are in awe of their own beauty, usually physical, because they are just so darn gorgeous.

Narcissistic personality disorder is another step up again and this I think is where most psychologists would locate President Trump.

The most famous example of a person with a narcissistic personality disorder is the evil queen in Snow White.

When the mirror on the wall told her that Snow White was more beautiful than she, the queen didn’t, like a sensible person, conclude that talking mirrors are more trouble than they are worth, and send it to the charity shop. Nor did she, as she would have done if she was merely vain, hire a new beautician.

No, she decided to have Snow White killed and much of the story revolves around her attempts to bring this about.

That’s one of the scarier aspects of narcissistic personality disorder. The attitude of those who have it towards those who don’t share in their admiration of themselves or who oppose them, can range from contempt to rage.

The Diagnostic and Statistical Manual of Mental Disorders (DSM-IV) also points out that people with the disorder may assume that others are totally concerned about their welfare. This struck me particularly when Trump in his speech at the National Prayer Breakfast said to his audience, “When you hear about the tough phone calls I’m having, don’t worry about it. Just don’t worry about it.”

This was a speech in which he had referred to the death of a US soldier in a raid in Yemen, in which children also died. Yet he assumed that the movers and shakers in the audience actually cared desperately about him, Donald Trump.

Another characteristic you might recognise is a grandiose sense of self-accomplishment about which people with the disorder often appear boastful and pretentious.

And they boost their own self-esteem by referring to the wonderfulness of those with whom they are willing to associate themselves. For instance, referring at that National Prayer Breakfast meeting to Roma Downey, who co-produced “The Apprentice” in the US, Trump said: “I also want to thank my great friend the Roma. Where’s Roma, beautiful Roma Downey, the voice of an angel. She’s got the voice – every time I hear that voice; it’s so beautiful. That – everything is so beautiful about Roma, including her husband because he’s a special, special friend.”

People with the disorder expect to be greeted with a fanfare (harps on the runway will do nicely), have little or no empathy and don’t want to hear about other people’s problems. They are harshly contemptuous of others who draw admiration away from them and they must denigrate these people: think of his scarcely veiled insults to Obama and others in his inauguration address, or to the Muslim couple whose son died fighting for the US in Iraq.

Future of the world

Within a family, this sort of outlook and behaviour can be destructive and can leave family members very hurt. Give the narcissist the presidency of the United States and you put the future of the world in the hands of a man who really, genuinely cannot understand what it is everybody is getting upset about – and who will never be able to understand it.

And as for giving him the codes for starting a nuclear war, let’s just hope they’re dummies.