Republicans row in behind Kavanaugh after second assault claim 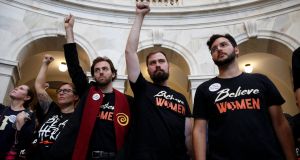 Demonstrators protest against US supreme court nominee Brett Kavanaugh in the Rotunda of the Russell Senate Office building on Capitol Hill in Washington. Photograph: Joshua Roberts/Reuters

Republicans doubled down on their support for supreme court nominee Brett Kavanaugh on Monday after a second woman came forward and accused him of abuse in the 1980s.

The New Yorker magazine reported that Deborah Ramirez alleged that Mr Kavanaugh exposed himself to her in his first year of college in Yale University.

The 53-year-old claims that the incident took place when both were drunk during their first year at the university – about a year after Christine Blasey Ford claims that Mr Kavanaugh assaulted her at a high school party.

“This alleged event from 35 years ago did not happen. The people who knew me then know that this did not happen, and have said so. This is a smear, plain and simple,” he said.

In a letter to the senate judiciary committee on Monday he dismissed both allegations as “smears pure and simple”.

US president Donald Trump also rowed in behind his nominee. “I’m with him all the way,” he said on his way into the United Nations in New York.

“There’s a chance that this could be one of the single most unfair, unjust things to happen to a candidate for anything,” Mr Trump said, describing Mr Kavanaugh as a man with an “unblemished past”, and an “outstanding person”.

As the White House denounced the latest reports as a “smear campaign”, Republicans on Capitol Hill also toughened their resolve, pushing back against what they claimed was an orchestrated attack by Democrats.

“When it comes to stopping president Donald Trump and his agenda, there seem to be no boundaries,” said senator Lindsey Graham, denouncing what he called an attempt to coach witnesses and report “thinly-sourced stories without proper verification”.

White House adviser Kellyanne Conway also spoke out against the latest allegations, questioning the reporting in the New Yorker, and noting that other outlets had been unable to back up the claims.

“This is starting to feel like a vast left-wing conspiracy,” she said on CBS This Morning. “I just don’t think one man’s shoulders should bear decades of the MeToo movement.”

But other Republicans faced pressure to vote against Mr Kavanaugh.

On Capitol Hill there were widespread protests which led to some arrests. Protesters gathered outside the office of senator Susan Collins of Maine, one of a handful of Republicans who are facing calls to oppose Mr Trump’s nominee.

With Republicans only holding a slim majority of one in the senate, and Democrats unlikely to back Mr Kavanaugh, the party needs its members to back the federal judge.

The top Democrat on the committee, Dianne Feinstein, who initially received information about Ms Blasey Ford’s accusation, wrote to the committee chairman calling for the confirmation to be postponed following the emergence of a fresh allegation against Mr Kavanaugh. She also called for a federal investigation into the matter.

Ms Blasey Ford is due to testify before the committee on Thursday, with the accused set to testify after. Several Republicans are calling for a swift vote on Mr Kavanaugh’s nomination following that hearing.

With the midterm elections fast approaching, the Republican leadership is anxious to push through a confirmation vote on Mr Kavanaugh’s nomination.