Republicans keep it local in race for US Senate

President Obama makes a final push to help struggling Democrats before Tuesday's midterm elections, in an effort to avert a "shellacking" at the polls like the one in 2010. Video: Reuters 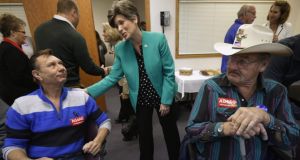 Republican candidate Joni Ernst on the campaign trail in Newton, Iowa. Her campaign ad about growing up on a pig farm clicked with voters. Photograph: Chip Somodevilla/Getty Images

Pigs and poultry. On such parochial issues can the make-up of national governments be decided, even in countries as large as the United States. They confirm the famous dictum most associated with the late Irish-American speaker of the house Tip O’Neill: all politics is local.

In a country where control of the Washington political establishment is determined by a handful of the 50 states in presidential elections and a smattering of swing congressional districts in the House of Representatives, it follows that the majority in the Senate is decided by a small number of states in today’s US midterm elections.

Senate Republican candidate Joni Ernst was ridiculed when she told voters in her debut campaign television ad in March about growing up castrating hogs on an Iowa farm. The tongue-in-cheek ad was aimed at sending the message that she is the best person to send to Washington “to cut pork”, shorthand for government overspending.

“I’m Joni Ernst and I approve this message because Washington is full of big spenders. Let’s make ’em squeal,” says the Iowa state senator to images of fluffy piglets and a soundtrack of squeals.

Combined with missteps by her Democratic rival Bruce Braley – a candidate whose name was mangled by the only Obama willing to travel to Iowa to campaign for him, Michelle – the ad propelled Ernst onto the national stage and made her a clear favourite for the seat.

“I know a lot of people think that ad is very strange but for a farming state for the most part it made a lot of sense,” said Timothy Hagle, professor of political science at the University of Iowa.

It confirmed the tough persona around Ernst, a lieutenant colonel in the Iowa Army National Guard, as someone in touch with Iowans who would protect the interests of the Hawkeye State against an unpopular president and an even more unpopular Congress.

As Ernst played to the values of constituents, Braley floundered over a row with a neighbour about her roving chickens and one of the most notable gaffes of this election cycle. He alienated Iowans after he was caught on videotape at a fundraiser, dismissing the veteran senator Chuck Grassley as “a farmer from Iowa who never went to law school”.

Most recent polls show Republicans on course to retake control of Congress for the first time since 2006. This victory would be even bigger than the “Republican wave” of 2010 when the GOP delivered a “shellacking”, as Barack Obama put it, on Democrats. The Washington Post said yesterday that, based on its polling numbers, it could be the most dominant Republican Congress since 1929.

A weekend poll by the Des Moines Register newspaper in Iowa, giving Ernst a seven-point lead, confirmed the growing assumption that Republicans would pick up the six seats they need to regain control of the Senate (reflecting the uncertainty around the race, bucking a trend in the last few days, a Quinnipiac University poll released last night put Ernst and Braley in a dead heat, each with 47 per cent of the vote and 4 per cent undecided).

This would turn the Washington bottleneck in the opposite direction, with the Democratic White House vetoing Bills sent from a Republican-led Congress rather than the GOP setting obstacles in front of Obama. “I think the wind is at our back,” Rand Paul, the Republican senator from Kentucky considered a lead challenger in the party’s 2016 presidential race, told CNN. He described the midterms as a “referendum” on Obama, saying he had failed to live up to his promise to be “a uniter – not a divider”.

The overarching national issue of these elections have been the public’s unease with Obama – typical of a president in his sixth year in charge – and with Washington politics in general, along with concerns about Ebola, Islamic State militants and the strength of the economy.

Obamacare, the president’s signature healthcare law, has not been the weapon of choice that it was for Republicans in 2010 because the law’s unpopularity has waned since its atrocious roll-out last year.

The closest races are in southern states that tend to lean Republican in national elections, and even in Iowa and Colorado, swing states that Obama won twice, and North Carolina, which he won once.

The president did his fellow Democrats no favours when he made himself a lead figure in this election by telling an audience last month that his name may not be on the ballot but his policies were. This made it difficult for Democrats to zero in on local state issues and gave Republicans a stick to beat them with.

In the House of Representatives, Republicans are tipped to pick up between four and 12 seats, building on their 233-to-199 seat majority over the Democrats. A net gain of nine seats would give the party their biggest majority in the House since 1946, which could make the job of Republican Speaker John Boehner more difficult as he tries to unite moderates with an even more rebellious conservative wing.

Such a scenario would definitely not help Obama in his lame-duck final two years in power, but a more divisive government led by more obstructive Republicans could, inversely, benefit the next Democratic presidential contender in 2016, whoever he – or she – might be.