British and European Union envoys have begun a first round of negotiations on Britain's divorce from the EU, with both sides saying it was high time to tackle details. Video: REUTERS 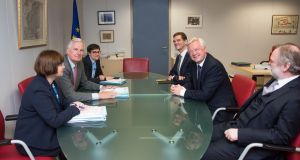 Officials and diplomats in Brussels expressed cautious optimism on Monday that progress can at last be made in the Brexit negotiations as British and EU negotiators began the latest round of talks.

UK Brexit secretary David Davis struck an upbeat note as arrived in Brussels for the first in a monthly series of week-long talks on the terms of Britain’s planned withdrawal from the EU.

“It’s time to get down to work and make this a successful negotiation,” he said as he was greeted by EU chief negotiator Michel Barnier at the European Commission’s Berlaymont headquarters.

As the negotiators broke up into working groups on the three priority themes of citizens’ rights, the UK “divorce bill” and issues relating to the Irish Border, EU officials expressed confidence that discussions could move forward, on the basis that the UK had begun to show its hand on key issues.

That optimism was countered, however, by a warning by Minister for Foreign Affairs Simon Coveney that some of the more intemperate discussion on both sides was hardening attitudes. He said he was particularly worried about the raising in the UK of unrealistic expectations.

Mr Coveney, speaking on the fringe of a foreign ministers’ meeting, said it was “important to be honest with friends”, and that the discussion in the UK “needs to be realistic as to what is possible”. He said if the UK wished to leave the single market and customs union and to set up trade deals all over the world, there would be “consequences” in terms of free access to the EU.

The negotiations were also taking place against the backdrop of increasing tensions within the British government over Brexit and other issues. Prime minister Theresa May will on Tuesday tell ministers to stop leaking details of cabinet meetings, following a succession of disclosures and days of infighting among ministers.

Philip Hammond, the chancellor of the exchequer, has suggested that Brexiteer ministers are behind the leaking of some of his remarks at cabinet last week. Supporters of Brexit view the chancellor with suspicion because in the negotiations with the EU he wants to prioritise the economy and business interests over immigration and sovereignty.

Former deputy prime minister Michael Heseltine said the cabinet leaks were a symptom of Ms May’s weakness, which was undermining Britain’s negotiations with the EU. “The Europeans have worked it all out. This is a government without authority. This is a deeply divided government and what they know, what the Europeans know, and what our national press knows is every day there’s a more depressing headline,” he said.

The preliminary challenge for this week will be to begin to establish the areas of difference between the two sides on the three priority topics .

Clarity on differences is probably most difficult on the thorniest of these issues, the UK’s Brexit bill, over which Mr Barnier and foreign secretary Boris Johnson clashed last week. Mr Johnson suggested the EU could “go whistle” for the €100 billion it is widely reported as having estimated UK liabilities at. Mr Barnier responded that he could not hear any whistling, “only the sound of a clock ticking”. He warned that acknowledgement of a liability was a precondition for talks.

Importantly the British government in a Commons statement on Thursday recognised it has obligations to the EU and that these need to be negotiated, but there was no elaboration .

Mr Coveney, however, welcomed last week’s British paper on citizens’ rights – the post-Brexit treatment of their respective citizens in the other’s jurisdiction –  as “a good start” and “a basis for negotiation”, not least in its recognition of Irish concerns for the Common Travel Area.

Moscow warns United States to stay away from Russia, Crimea 11:15
How have other countries responded to concerns over the AstraZeneca vaccine? 10:56
Derek Chauvin trial: George Floyd was ‘a person everybody loved’, brother says 08:12
Japan to release 1 million tonnes of contaminated Fukushima water into sea 07:35
Daunte Wright shooting: Clashes with police for second night in Minneapolis 06:38