Presidential inaugurations: from top hats to fears of assassination

On January 20th 2017 Donald Trump will be sworn in as the 45th president of the United States, here are some of those who have gone before him. 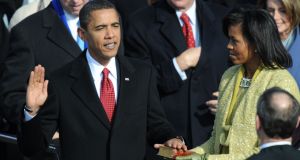 Barack Obama as he is sworn in on January 20th, 2009, as US president, on the same Bible used to swear in Abraham Lincoln. Photograph: Tim Sloan/AFP/Getty Abraham Lincoln: the 16th president of the United States 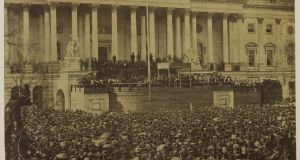 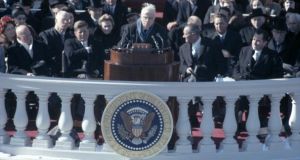 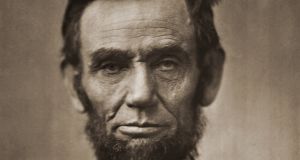 Donald J Trump will on Friday ascend the steps of Capitol Hill and utter an oath first sworn by George Washington in 1789. “I do solemnly swear that I will faithfully execute the Office of President of the United States, and will to the best of my Ability, preserve, protect and defend the Constitution of the United States.”

At the time of Washington, of course, things were a little ad hoc in the Americas. They had only recently decided that their elected leader would be called “Mr President” and not, as John Adams had favoured, the more imperial “His Benign Highness” (I suspect Donald Trump might reopen this debate).

At the last minute, it was thought it might be nice for the new leader to place his hands on a book, so someone rushed out to procure a Bible (only three presidents have gone without a Bible – Theodore Roosevelt, Franklin Pierce and John Adams) and Washington also added “So help me God” to the oath on the fly.

In those days, the inauguration took place in New York away from the public gaze (the public? Why would you want to invite those schmucks?). It was quite informal. Thomas Jefferson was the first president to be sworn in in Washington DC. He strolled back to his boarding house afterwards where he had to wait for a free table for lunch (in 1977 Jimmy Carter also went from the Capitol to the White House on foot, but did so at the head of a parade of people).

The location for the swearing-in was moved from the east to the west of the building for Ronald Reagan’s inauguration in 1981, largely for logistical reasons, though Reagan implied in his speech that it was so he could face towards his native west coast. He was a great ould ham, was Reagan. 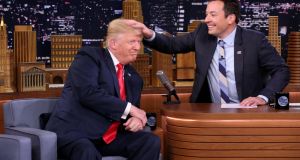 The media took increasing interest. James Madison’s speech was the first to be published in the newspapers. In 1845, James Polk took office to the sound of Samuel Morse tapping out the news on his newly invented telegraph machine. James Buchanan’s inauguration in 1857 was the first to be photographed. William McKinley’s was the first filmed by movie cameras. Calvin Coolidge’s oath of office was broadcast on radio. Harry Truman’s was televised. Bill Clinton’s had a live web feed. Barack Obama’s was YouTubed. Trump will probably live-tweet throughout.

Herbert Hoover’s inauguration in 1929 was the first to be filmed for newsreels. Chief justice William Howard Taft garbled the oath and an eight-year-old wrote him a note pointing this out. Taft did what any statesman-like figure would do in such circumstances. He argued with the little girl. Nerds checked the newsreels and Taft had to apologise. Chief justice, 0; little girl, 1 (a phrase no chief justice wants to hear).

The entertainments on display on inauguration day have been eclectic. A manned hot-air balloon took off while James Buchanan was being sworn in in 1857, possibly to distract from the fact he had a bad case of diarrhoea. Dwight Eisenhower, who had apparently genuinely wanted a quiet affair in 1953, instead had to contend with a four-hour ceremony at which he was, at one point, lassoed by a cowboy.

Rugged hunk Theodore Roosevelt was protected at his inauguration by horse-riding Rough Riders, the division he commanded during the Spanish-American war. This is slightly more impressive than Bikers for Trump (Trump had “bad feet” and so couldn’t fight in Vietnam). Roosevelt was also the youngest president inaugurated, at the age of 42 (a year younger than Kennedy) while Trump is the oldest, at 70 (a year older than Reagan).

Slightly less impressively, Ulysses S Grant had canaries shipped in for his inaugural ball in 1873. They froze to death in the cold and fell on the dancers below. Richard Nixon wanted no interfering birds whatsoever at his big day 100 years later so had his parade route sprayed with a chemical bird repellent. This led to the route being lined with dead pigeons, indicating, I suppose, that the national nightmare was beginning (“Our long national nightmare is over,” said Gerald Ford on his inauguration a year later).

At Harry Truman’s inauguration parade, B36 bombers seemingly simulated attacks on the White House in a move that would probably prove unpopular now. At least they were simulated attacks. In 1829, Andrew Jackson, who had campaigned as a man of the people, opened the White House to enthusiastic supporters who wrecked the gaff. Jackson supposedly had to escape out a window and his staff had to lure the mob away by putting a tub of whiskey on the lawn. Seriously.

Trump’s isn’t the first contentious inauguration. Anti-war protesters picketed George W Bush’s big days, and Nixon’s. Franklin Delano Roosevelt had to contend with a rally of socialists roused by the depression. Rutherford B Hayes, who lost the popular vote but became president based on the electoral college vote in 1877, took his oath in secret at the White House, for fear of assassination.

Work ethics have also differed from president to president. FDR huddled with financial experts even as the inaugural parade moved by and Reagan had to contend with the release of the Iranian hostages minutes after his inauguration speech. Theodore Roosevelt, on the other hand, understood work/life balance and followed his ascension to power with a six-week hunting holiday.

Inauguration day is also an opportunity for rhetorical flourishes. These do not always come off. A few pre-Lincoln presidents used their speeches to explain their country’s tolerance of slavery. Vice-president Andrew Johnson got drunk the night before Abraham Lincoln’s second inauguration and spoke with hungover eloquence about how great he, Andrew Johnson, was. But some inaugural speeches have been quite memorable. JFK said “ask not what your country can do for you – ask what you can do for your country”. FDR told Americans they had “nothing to fear but fear itself”.

The good ones are brief. George Washington’s inaugural speech is among the shortest, at 135 words. William Henry Harrison spoke for two hours in 1841, in the rain without a hat or coat. He died of pneumonia a month later.