Inauguration Day for Trump: Guide to what, when and where

As throw-in time edges closer, here is how you can follow the action on irishtimes.com

Political commentators give insight into the rise of the phenomenon that is, Donald Trump. Video: Enda O'Dowd 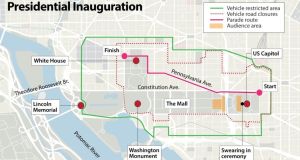 Security officials say 99 groups – for and against Donald Trump – plan to demonstrate in the US capital this weekend, including 63 on Friday, the day of the inauguration ceremony.

It’s either the dawn of a new, wonderful era for America or something between War of the Worlds and Armageddon – depending on your viewpoint.

Either way, on Friday, Donald Trump will be sworn in as the 45th president of the United States.

How to follow proceedings on irishtimes.com:
* The Irish Times will have a live blog up and running at 3pm on Friday afternoon, with Hugh Linehan and Rachel Flaherty bringing you the latest from Washington DC.
* There will be news, reaction and analysis from Simon Carswell and Orlaith Farrell in the US, as well as the latest reaction from this side of the Atlantic – from Fintan O’Toole, Ruadhán Mac Cormaic and others.
* As the world watches Trump assume the crown, our correspondents and reporters stationed throughout the world will be filing on the various reactions of world leaders – including Denis Staunton from London, Isabel Gorst from Moscow, Clifford Coonan from Beijing and Daniel    McLaughlin from Kiev.
Throw-in time at Capitol Hill?

Crowds are expected to begin going through the security screening gates from around 11am Irish-time (6am US time). Spectators must have a ticket to see the ceremony in person, but tickets are free – though obviously in high demand. The tickets have mainly been secured through local, State and national politicians. There will also be giant screens showing the proceedings live in downtown Washington DC, as well as many US cities. It’s just like a World Cup final really – though obviously less important. Walking and standing will be the order of the day for tens of thousands in the city on Friday. But, on the plus side, country and western music will start around 2.30pm (9.30am US) around Capitol Hill. Celebrities have been falling over themselves to claim they have turned down requests for them to play at the inauguration. However, our own Lord of the Dance, Michael Flatley, has accepted an invitation to perform at one of the official Balls on Friday night – though he may just introduce dancers, rather than participate himself. Others confirmed to perform at some stage on Friday include Sam Moore, The Rockettes, The Mormon Tabernacle Choir and Toby Keith. What more could anyone want?

And down the road?

Since the 1970s the president-elect spends the night before Inauguration Day at Blair House - the guest house for the White House. Early Friday morning Trump will attend St John’s Episcopal Church, which is right beside Blair House. Then, around the same time as the music begins to waft down down Pennsylvania Avenue, the outgoing-president Barack Obama and soon-to-be-president Donald Trump will have coffee and biscuits in the White House, before going, probably in the same car, to Capitol Hill. Awkward - though the good news is that it’s only just over 2km away.

Who’ll be there, and who won’t?

Speaking of awkward, former president Bill Clinton – and his wife Hillary, who of course lost to Mr Trump in November – are expected to attend the ceremony. George HW Bush will not be there, after being moved to an intensive-care unit at a Houston hospital with pneumonia on Wednesday. His wife, Barbara, was also admitted to Houston Methodist on Wednesday “as a precaution after experiencing fatigue and coughing”.

Also not attending – though for completely different reasons – are at least 50 House Democrats, after the recent war of words between Mr Trump and congressman and civil rights activist John Lewis. 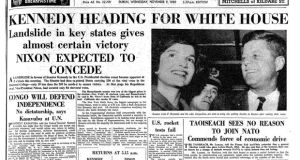 GALLERY: 100 years of reporting US elections

The official proceedings of Inauguration Day commence around 5pm (noon US) on the West Lawn of the US Capital with the vice president-elect and president-elect taking the Oaths of Office. Chief Justice John Roberts will administer the oath for Mr Trump, who will place his hand on two bibles – one he’s had since childhood, and the bible Abraham Lincoln used in 1861. He will then repeat these words . . .

Notice the lack of, “so help me God” at the end.

While it is not an official part of the presidential oath, traditionally, those four words are added.

It would be a major shock if Trump didn’t.

He will then deliver his inaugural speech as leader of the free world.

Then it’s off to his new home – a house far less luxurious than his used to, but The Donald will just have to slum it at the White House. The road that connects the US Capital to the White House will be lined with well-wishers (and perhaps a few less enthusiastic). No tickets necessary. The presidential procession along Pennsylvania Avenue  will get underway around 8pm (3pm US).

There are two official balls and several unofficial ones planned. The new president and vice president are expected to attend the official ones - held on separate floors of the Walter E Washington Convention Center. President Trump will also surely make an appearance at the Armed Services Ball, which will be held at the National Building Museum.

The fun doesn’t end there. On Saturday, tens of thousands of protesters are expected to take to the streets again for the “Women’s March on Washington”. It is, in effect, a protest march at the events of the proceeding day, however organisers insist it is a way to “promote women’s equality and defend other marginalised groups”. Marchers will gather near the National Museum of the American Indian for speeches at 2pm (9am US), with celebrities such as Katy Perry, Cher and America Ferrera expected. Then, around 6pm (1pm US) the match will begin to The Ellipse (the park just south of the White House). It will be interesting to see which day – Friday or Saturday – draws the bigger crowd.