Actor Liam Neeson says he is "humbled" to be presented with an award by President Michael D. Higgins, in his address President Higgins made special mention of Neeson's 20 years of work supporting Unicef. Video: Ronan McGreevy 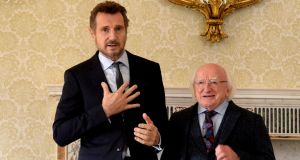 Liam Neeson has spoken at countless awards ceremonies and public engagements over the years. Yet, the actor professes to having a “genuine fear” of public speaking.

There was some guffaws when he made the comment after being presented by President Michael D Higgins with the Distinguished Service for the Irish Abroad Award at Áras an Uachtaráin on Friday.

“Everybody says, ‘you’re an actor, you should be good at that’. It’s just not true,” he said, acknowledging the incredulity of his statement.

Looking youthful and trim for a man of 65, Neeson said he was humbled by the award, which was carved from Irish wood by students based at the Galway-Mayo Institute of Technology in Letterfrack.

“I’m very proud to be Irish. I will continue to fly the flag for Irish artists and for Unicef, ” he said.

The award was due to be presented to him last November, but he was unavailable. However, Mr Higgins said Neeson “more than deserved a special occasion” for himself in the Áras.

He was, the President added, a “splendid Irish man abroad” and a “worthy recipient” not just for his work as an actor but also his involvement as an ambassador for Unicef.

The awards were first launched in 2012 by Mr Higgins to acknowledge that the Irish family “is not defined by national borders or territories”. It is for Irish people abroad who are making a contribution to humanity, the President explained.

“It is defined by care, compassion, a common culture and a consciousness of our historical experience.”

He recalled that in April 2016 he presented the Ballymena-born actor with an award for outstanding contribution to cinema.

Neeson had been to the forefront, the President said, in promoting Irish film in the 1990s when the industry in Ireland received a “second wind”. He also acknowledged Leeson’s role during the commemorations to mark the centenary of the Easter Rising. He had been the narrator of the University of Notre Dame documentary 1916: The Irish Rebellion, which was screened worldwide.

Above all, Mr Higgins said he wanted to acknowledge Neeson’s contribution as a goodwill ambassador for Unicef for the last 20 years.

Minister for Arts Josepha Madigan commended Neeson, describing him as an “incredibly gifted and internationally renowned film actor who has never lost touch with his Irish roots.

“He has helped to raise awareness of Ireland, Irish film, and Irish artists around the world, especially in the United States where he is based. His award today is richly deserved.”