An Irishman’s Diary: Connecticut’s Great Hunger Museum and the bagel maker who made it possible 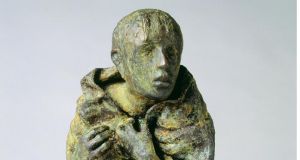 It is to a Jewish bagel tycoon, born in 1930s Connecticut, that we owe the world’s largest collection of art relating to the Irish Famine. His name was Murray Lender. And despite being such an obvious candidate for nominative determinism – the theory that names influence vocation–- he never pursued a career in financial services.

Instead he worked for his father’s bakery in New Haven, where the speciality was a doughnut-shaped bread roll that the old man had brought with him from his native Poland in 1927.

For years, the family made a livelihood supplying these mainly to their local fellow emigrants from eastern Europe. Then Murray and his brothers began freezing the produce, so it could travel further.

And soon what Lender called the “Jewish English muffin” was breaking out of the ghetto to sell in vast numbers across the US.

But he also put his mouth where his money was, eating the goods himself (toasted usually) in TV ads. In his mission to bagelise America, he had a genius for publicity. He produced green bagels for St Patrick’s Day, and supplied a G7 summit with rolls shaped like the head of Maggie Thatcher and other world leaders.

With such marketing flair behind it, the bagel had no boundaries.

His obituary in the Economist recalled one notable milestone: “The ethnic barrier tumbled, he noted, when he sold 50 cases of frozen bagels in Arkansas. ”

In the end, the company grew too big for a family. So they sold to Kraft in 1984, making Lender a wealthy man.

And it was as such, in a latter-day role as chairman of the board of trustees in his local university, Quinnipiac, that the great bagel maker became instigator of a museum dedicated to the Great Hunger.

The catalyst was a speech by Quinnipiac’s president, John L Lahey.

The Bronx-Irish Lahey had himself been woken to the full tragedy of the Irish Famine by Christine Kinealy’s 1994 book, This Great Calamity.

After he was named Grand Marshal of the New York St Patrick’s Day Parade in 1997 – the 150th anniversary of the disaster – he made a lot of speeches on the subject. One struck a chord with Lender, as Lahey recalled 15 years later.

“He said the Jews talked about the Holocaust all the time, but my speech was the first time he heard Irish friends talk about the Famine,” Lahey told this newspaper’s Lara Marlowe in 2012.

So Lender now again defied his surname, this time by just donating some of his millions for what became the Great Hunger Museum at Quinnipiac.

Alas, he didn’t live to see the finished work. He died in March 2012. The museum opened seven months later, in October, with guests including Ireland’s then-minister for tourism, one Leo Varadkar.

The collection has now grown to 150 pieces, ranging from work that dates to the years of the disaster itself right up to the responses of current-day artists including Brian Maguire and Rowan Gillespie. The later stuff tends to be more graphic, for obvious reasons. In the mid-1840s, there was little market for the realistic depiction of what was happening.

Take Daniel MacDonald’s 1847 painting of Irish Peasant Children, for example. It’s a cornerstone of the collection, although it barely hints at the calamity behind the rosy complexions of the three young characters. By stark contrast, Michael Farrell’s monumental Black ’47 depicts the trial of Charles Trevelyan, the British civil servant who oversaw the relief effort, such as it was, with skeletons rising from the grave to give evidence against him.

Unfortunately, for those of us on this side of the Atlantic who might like to see the museum, Connecticut is not the easiest place to reach. But the good news is that, having used his fortune to acquire the collection, Murray Lender is now posthumously, and at last, living up to his surname, because the museum (or a big part of it) is about to visit us, on an 18-month loan.

Starting in March, 50 of the exhibits will tour three Irish venues. The last, a year from now, will be Derry.

In the meantime, the first two venues will present a dramatic contrast in themselves.

Thus the show opens on March 7th in Dublin Castle, the centre of British rule during the 1840s. Then in July, it moves to the West Cork Arts Centre, located in the Famine’s ground zero, Skibbereen.