Violent protests erupted in a city in the US state of Pennsylvania after police fatally shot a black man who family members said had a history of “mental issues.” Video: Reuters/ As credited 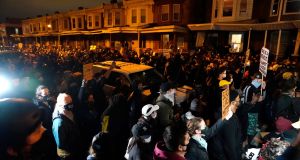 Hundreds of demonstrators marched in West Philadelphia over the death of Walter Wallace who was killed by police in Philadelphia on Monday. Photograph: Matt Slocum/AP

A curfew was set to go into effect in Philadelphia on Wednesday night, as the city braced itself for a possible third night of protests and looting following the police shooting of an African American man on Monday afternoon.

Walter Wallace jnr (27) was shot dead by police in West Philadelphia after officers were called to respond to a domestic incident.

Phone footage filmed by a neighbour showed Mr Wallace, who was holding a knife, in a tense standoff with two police officers on the street. A woman – believed to be the victim’s mother – stood between Mr Wallace and the two white police officers. A few seconds later police opened fire and the victim fell to the ground. He died later in hospital.

Mr Wallace’s mother said she called 911 for assistance, and said her son had serious mental health issues. The family’s lawyer said she had expected an ambulance to arrive, and not the police. The victim was recently married and had several children.

Police confirmed they had been called to Mr Wallace’s home several times in recent months.

The two policemen, who each fired approximately seven shots, have been taken off duty pending an investigation.

Mr Wallace’s family are asking why non-lethal methods of detainment were not used by police. The two officers did not have taser guns, officials said.

Several business were looted in different areas of the city on Monday and Tuesday night, and nearly a dozen people were shot. Up to a thousand people protested on Tuesday night, but the demonstrations spilled over into violence, with clashes taking place between police and protesters, some of whom were rioting. Several police officers were injured. Businesses across the city were boarded up on Wednesday ahead of the curfew.

Speaking in Nevada on Wednesday, US president Donald Trump condemned the rioting in Philadelphia.

“The mayor or whoever it is who’s allowing people to riot and loot ... it’s just a horrible thing,” he said. “The rioting in Philadelphia – they have to stop it ... You can’t let that go on. Again, a Democrat-run state, a Democrat-run city.”

“You’ve got to have law and order, you’ve got to have respect for the police,” he said, adding that the federal government could send law enforcement assistance to the city if requested. “We’ll be there in an hour.”

Mr Trump also criticised his Democratic opponent Joe Biden’s response to the events in Pennsylvania’s largest city. “He’ll be very very weak” as president, he said of Mr Biden, claiming that his rival had received no endorsements from police organisations.

“The problem with Joe, is that Joe’s all talk and no action . . . You can’t let that happen to a wonderful place like Philadelphia.”

But Mr Biden condemned the violence on Wednesday. Asked about the events overnight in Philadelphia, he said: “I think to be able to protest is totally legitimate, is totally reasonable, but the looting . . . as the victim’s father said, you’re not helping, you’re hurting.”

Mr Biden and his running mate Kamala Harris issued a statement on Tuesday following Mr Wallace’s death. “Our hearts are broken for the family of Walter Wallace jnr, and for all those suffering the emotional weight of learning about another black life in America lost. We cannot accept that in this country a mental health crisis ends in death,” they said.

The fatal shooting of Mr Wallace threatens to push the issue of law and order back to the forefront of the political conversation, less than a week before the presidential election.