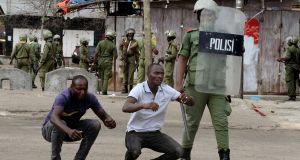 Voters go to the polls in parliamentary and presidential elections in Tanzania on Wednesday amid concerns about widespread repression and police violence.

John Magufuli – who came to power in 2015 as head of the Chama Cha Mapinduzi party – looks likely to be elected president for a second term.

The 60-year-old is nicknamed “The Bulldozer” because of his strongman style and stated goal of cracking down on corruption. He has become increasingly authoritarian.

Opposition presidential candidate Tundu Lissu fled the east African country in 2017 after an assassination attempt, returning at the end of July. Earlier this month he was banned from campaigning by the National Electoral Commission due to “ethics violations”.

Social media was reportedly blocked for some Tanzanian users on Tuesday. In a statement, Twitter said it seen some “blocking and throttling” of its site ahead of the election.

“Internet shutdowns are hugely harmful, and violate basic human rights and the principles of the open internet,” the social media giant said.

Since Mr Magufuli came to power, at least 10 local media outlets have been banned for varying periods of time. Foreign journalists must now always be accompanied by a government official.

Voting took place in Zanzibar on Tuesday, while it is scheduled to take place on the rest of Tanzania on Wednesday.

Zanzibar’s main opposition party, ACT Wazalendo, said its leader, Maalim Seif Sharif, was arrested while trying to vote. The party also accused security forces of shooting nine people dead on Pemba island as they protested against vote-rigging. Tanzanian police chief Simon Sirro told journalists that 42 people had been arrested, but no one had died. Pemba is known as an opposition stronghold.

Citizens of the semi-autonomous group of Indian Ocean islands vote in both their own and the Tanzanian elections, and Zanzibar will elect its own president. The incumbent, Ali Mohammed Shein, is leaving office after two five-year terms.

The UK and US ambassadors were among international observers expressing concern. “I’m alarmed by reports from Zanzibar and elsewhere of violence, deaths and detentions. It’s not too late to prevent more bloodshed,” said US ambassador to Tanzania Donald J Wright. “Let’s all pray for peaceful, fair elections.”

David Concar, the UK’s high commissioner to Tanzania, said he was appealing to everyone involved in elections to “act with restraint and integrity to ensure the will of the people can be expressed peacefully at the ballot box”.

Tanzania – which has a population of roughly 60 million people – became a focus of international concern in April after it stopped publishing coronavirus figures. Mr Magufuli had encouraged citizens to go to church and pray for the pandemic to end. In June, he declared the virus “eliminated” from Tanzania by God.