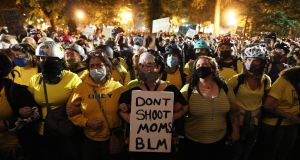 The ‘Wall of Moms’ form a line at a Black Lives Matter protest in July against racism and police brutality in downtown Portland, Oregon. Photograph: David Swanson/EPA

One month ago, Portlanders took to Facebook to alert friends and family outside the city: “I’ve been marked safe from living in an anarchist jurisdiction.”

After months of pandemic shutdowns and casualties, a racial justice reckoning, and wildfires that burned vast swathes of the state and blackened the city air, Donald Trump’s new phrase for Oregon’s biggest city was met largely with derision.

Portland – along with Seattle and New York – had been identified as an “anarchist jurisdiction” by the Department of Justice in a threat to withhold federal funding from the liberal cities that held the president in clear contempt.

“I just thought it was ridiculous and amusing,” says Robin Beth. A 55-year-old mother of two living in Portland’s well-heeled West Hills neighbourhood, she says she’s exactly “the person that they’re trying to scare”. But Beth, who attended protests but left before any confrontation, says she was more afraid of the federal troops – who were pulling people off the streets into unmarked vehicles – than she was of whomever they were sent to protect her from.

Comic writer David Walker turned his disgust at the Trump designation into an art project. “Anarchist jurisdiction just sounds like the title of a really bad B movie from the 80s that Chuck Norris or someone would be in,” he says.

He eats no meat. He wears no shoes. He shows no mercy. BAREFOOT VEGAN in the ANARCHIST JURISDICTION You can only push a peace-loving vegan so far! #anarchistjurisdiction

Walker began to make fake movie posters on the theme, filling his Instagram account with gems including “Barefoot vegan in the anarchist jurisdiction”, depicting an angry man kicking his way into centre frame. “He eats no meat. He wears no shoes. He shows no mercy,” the poster declares.

“I think part of the anger is that in Portland we tend to think of ourselves as a quirky liberal town and the federal response and local law enforcement response to the protests caught a lot of people off guard,” says Walker. “It was the shock of ‘This can’t be happening here because this is the town where a guy rides around on a unicycle playing a flaming bagpipe.’” (This is real: Portland’s best-known street performer is The Unipiper – Google him).

Trump’s Portland fixation even made its way onto the presidential debate stage, where the US president said the city was run by “radical left Democrats” but that the “sheriff” of Portland had come out in his support. In fact the city doesn’t have a sheriff, but Multnomah County, where Portland is located, does and sheriff Mike Reese wasn’t happy with the shout-out. “As the Multnomah county sheriff I have never supported Donald Trump and will never support him,” he clarified on Twitter.

Meanwhile, the few city blocks downtown that had become the locus of police and protester confrontation and were once cordoned off, are back to something approaching regular use. The federal courthouse remains heavily barricaded, but part of the fencing had to be moved after city authorities objected to its obstruction of a bike lane. Graffiti abounds with anti-police messages. Local police, criticised for its use of force, have been using tear gas regularly to disperse protesters. Several downtown buildings are still protected by boarding, but local artists have used the plywood as a canvas for artwork in support of the Black Lives Matter movement.

More than 130 days since they began, protests are ongoing – statues have been pulled down across the city, and the local historical society premises was recently damaged. But one regular protester tells me their group – which organises snacks, medical treatment, and hand sanitiser for those who show up – also sends out cleaning crews the day after a protest to pick up tear gas canisters and other litter.

CaSaundra Johnson, who moved to Portland from a small Texas town three years ago, sees Trump’s decision to make Portland the enemy as a savvy move to play to his base. “What he was looking for was a foil. And if you could create a foil, this community [in Portland] would be it,” she says. “Because they care so much about their right to express and to protest and to advocate for the causes that they appreciate.”

Recent polls show Democrat candidate Joe Biden with a solid lead in Portland – but Trump knew that already. His straw man anarchist jurisdiction was never going to swing his way, and so became an experiment in how far he could push things to serve his law and order message.

Meanwhile, most of its citizens go about their daily lives, conscientiously observing social distancing guidelines, paying their arts tax, using the bike lanes, and hoping their five minutes of national fame is almost over. Johnson says regardless of how Trump sees it, she feels safer in Portland than anywhere else. “If something goes down, this is the city that I’d want to be in, because I feel that people would fight for me.”