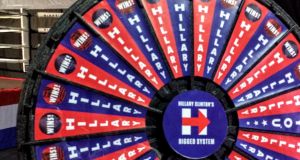 A prize wheel at the Republicans’ base in Philadelphia taking entitled “Hillary Clinton’s Rigged System”.

Talk-show host Stephen Colbert returned as his fictional character Caesar Flickerman for the Democratic version of his “The Hungry For Power Games” after poking fun at Republicans in Cleveland last week. He ran riot on Sunday in the Wells Fargo Centre, the venue where Hillary Clinton will be crowned Democratic presidential nominee.

Priming his pet (stuffed) weasel Caligula, Colbert was in Philadelphia searching for the thousands of deleted Clinton emails.

“Get the scent, get the scent,” Colbert whispered to Caligula, pushing the weasel’s nose to a smartphone, before throwing it. “Go find the emails, go, go!”

It would be funny for Clintonistas if the email scandal wasn’t so damaging. A new CNN/ORC poll found 68 per cent do not consider Clinton honest or trustworthy, her worst rating, coming after the FBI director James Comey said she was “extremely careless” in her handling of classified information on her private email.

Republicans are having their own fun in Philadelphia. The party has picked an appropriate base near the Democratic party: a wrestling, boxing and martial arts arena. This city is the fictional home of Rocky after all.

“Considering the infighting we have seen in the Democratic Party over the last 24 hours, it is a very fitting location for our operation,” Republican national committee spokesman Sean Spicer said on Sunday night.

To pack their punch against Clinton and claims that she is gaming a “rigged system,” the venue has loaded games including a corn-hole, Connect Four and a prize wheel. “Hillary wins every time,” said Spicer. The media swag bag included a dice where a “H” comes up every time and a towel “to wipe your server clean.”

5 – The percentage point lead that Donald Trump enjoys over Hillary Clinton in a new CNN/ORC poll (in a four-horse race with libertarian candidate Gary Johnson and the Green Party’s Jill Stein), his best showing in the poll since September 2015.