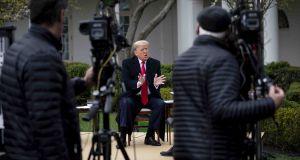 US president Donald Trump speaking during a Fox News virtual “town hall” in the Rose Garden of the White House on Tuesday. Photograph: The New York Times/Bloomberg

Ever since the Trump administration shifted gear in its response to the coronavirus outbreak and began taking the pandemic seriously, a centrepiece of the White House strategy has been the daily task force briefing.

Each day, senior administration officials, led by vice-president Mike Pence, and healthcare experts like top national immunologist Anthony Fauci and taskforce chair Deborah Birx, have been the public face of the crisis.

Increasingly, Donald Trump himself has taken the lead in the briefings, edging out Pence, amid speculation that the president was displeased by the relatively good media coverage his vice-president had attracted.

On Tuesday, however, the coronavirus briefing was absent from the White House schedule. Instead, Trump held a “virtual town hall” with Fox News, although a regular briefing was added later in the day following complaints.

The two-hour Fox News event was livestreamed from the White House Rose Garden. Before the president strode out from the West Wing across the garden wearing his signature dark suit and red tie, Pence came on air as the warm-up act.

As Fox News host Bill Hemmer moderated, questions were livestreamed from Fox viewers across the nation and the news presenter in studio.

Brett, a viewer who logged in via Facebook, asked the vice-president when all Americans would be able to get tested.

“Brett, it’s a good question,” Pence said in his familiar folksy tone. “What I can tell you that literally testing is expanding all around the country by the tens of thousands every day.”

Celebrity doctors who are Fox contributors were also given the opportunity to ask questions. Dr Oz, a TV personality who originally found fame on the Oprah Winfrey show, used his question to again repeat unproven theories about the effectiveness of anti-malaria drug chloroquine to treat coronavirus.

Trump then joined the makeshift studio, along with Birx and the surgeon general. For the first time, the group observed social distancing by sitting a few feet part.

As he navigated his way through softball questions from the interviewers – Fox contributor Dr Nicole Saphier began her question with the words “as a nation we are beholden to you” –  Trump set out his strategy in tackling coronavirus.

“Call it luck or call it talent, it doesn’t matter. It was a great decision,” he said, as he pointed to his move to stop flights from China in February. Within minutes he had referred to “sleepy Joe Biden”, the person most likely to be the Democratic nominee in November’s election.

He also took a dig at New York governor Andrew Cuomo, who had earlier called on the federal government to send ventilators to help his state, which has become the US epicentre of the crisis. Holding a report, Trump claimed that Cuomo did not buy ventilators in 2015 when he had the opportunity, reiterating his suggestion that it is the responsibility of states, and not the federal government, to fend for themselves.

Most significantly, Trump doubled down on the suggestion that he is preparing to restart the economy, stating that he hoped America would be open for business by Easter, April 12th.

“You can destroy a country this way by closing it down,” he said. “We lose thousands and thousands of people each year to the flu . . . we don’t turn the country off.”

‘Suicides by the thousands’

Predicting that there would be “suicides by the thousands” if America continued to shut down, he repeated his new mantra that the “cure is worse than the problem”.

“Many more people are going to die if we allow this to continue . . . We have to go back to work,” he said.

As the town hall came to a close, the Fox News host thanked the president and talked about the value of public service.

For the rest of the American public the news coming in from states continued to be dire. In New York, Cuomo said that cases were doubling every three days, while several states tightened their stay-at-home orders.

On Capitol Hill, the Senate continued to negotiate a $1.8 trillion stimulus package, with hopes that an agreement was in the offing, boosting stock markets somewhat.

With the World Health Organisation warning that the United States could become the epicentre of the crisis, for anxious Americans the next week is likely to be crucial, whatever their president says.