Coronavirus: France turns to literature amid the despair of pandemic

Paris Letter: The French are finding relevance in books about epidemics and confinement 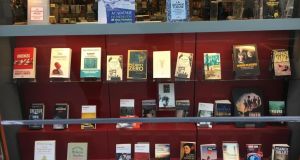 The Chantelivre bookshop in the rue de Sèvres has window display of 36 books about hospitals, epidemics and quarantine. Photograph: Tala Skari

Perhaps only the French could make a literary event of a pandemic. The Chantelivre bookshop in the rue de Sèvres, though sadly closed, vaunts a window display of 36 books about hospitals, epidemics and quarantine.

Finance minister Bruno Le Maire, who writes novels in his spare time, suggested that bookshops ought to be exempted from the lockdown as books are “items of first necessity”, like food and medicine. An added incentive for Le Maire, who leads the French crusade against US internet giants, would be to prevent Amazon profiting from the crisis.

The debate fizzled when the booksellers syndicate said conditions were not conducive to reopening bookshops. The sad sign at my favourite bookshop, L’Écume des Pages, says delivering books presents too great a risk of contagion, and urges customers to “reread the books you loved. Go through your shelves to refind forgotten gems, but keep reading!”

The writer Sylvain Tesson, whose book The Snow Leopard won the prestigious Prix Renaudot last autumn, spoke with wisdom on France Inter radio, saying that “the only way not to give in to the general collapse, and the only thing we can control, is to not collapse ourselves”.

Tesson spent months on a mountainside in Tibet, waiting to see a snow leopard. He has endured long periods of solitude, including in hospital after a climbing accident. “The only thing you can do is not struggle against time,” he says. “If you make an arithmetical war against the passing seconds, you will be crushed by it.”

There are, of course, people who do not enjoy solitude and silence. “Books have come to our rescue,” Tesson says. “They offer a fabulous ratio between cost and enjoyment.”

Tesson recommended two novellas on the theme of seclusion: Stefan Zweig’s The Royal Game (also known as Chess Story), about a man who survived imprisonment by the Nazis by stealing a book of past masters’ chess games, and then memorising each game, and Ivan Turgenev’s Diary of a Superfluous Man, in which a dying man looks back lucidly on the events of his life, particularly his failed love affairs.

With each catastrophe of recent years, the French have found relevance in a classic piece of literature. After the jihadist Charlie Hebdo attacks in January 2015, Ernest Hemingway’s A Moveable Feast, about the Paris he loved, was left on makeshift memorials of flowers and tea-lights. When Notre-Dame Cathedral burned last year, Victor Hugo’s novel of the same name became a bestseller.

Now Albert Camus’s 1947 novel The Plague, about a modern-day epidemic of plague in Oran, Algeria, has returned to prominence in France and other countries. The plague, which ravaged Europe for centuries and which scientists say could still resurface, makes Covid-19 look like a picnic.

Yet there are obvious parallels between Camus’s book and our situation, in particular the initial reluctance of authorities to recognise that an epidemic is under way, and to take serious sanitation measures. The central character, a doctor called Rieux, fights valiantly to save lives within the quarantined city.

Blindness, published by the Portuguese writer José Saramago in 1995, is also much talked about these days. A doctor, this time an ophthalmologist, is again a central character. Victims of a sudden epidemic of blindness are put into quarantine in an asylum, where they are guarded by the army. Society breaks down completely.

The themes of epidemic and confinement are inescapable. The weekly newspaper Le 1 has published Edgar Allan Poe’s The Masque of the Red Death, in which a medieval prince walls himself and his court inside a castle to escape the pestilence outside. Growing bored after months of seclusion, they organise a masqued ball, at which a stranger appears, “tall and gaunt, and shrouded from head to foot in the habiliments of the grave”.

Not all pandemic literature is so bleak. Gabriel García Márquez was, like Camus and Saramago, a Nobel laureate. His Love in the Time of Cholera is on my list of books to reread. I remember it as a tender love story between the ageing Florentino Ariza and Fermina Daza, whose love was thwarted in their youth. They find each other again after Fermina’s husband dies in typically Márquez fashion, by falling off a ladder while retrieving his pet parrot from a mango tree.

While most of us indulge in a rare opportunity to read, I hope that some aspiring author, perhaps in Paris, has begun writing Love in the Time of Coronavirus.