Obama and Trump leave insults behind in awkward first encounter

Barack Obama and Donald Trump meet at the White House, with Obama calling the 90-minute meeting “excellent” and the president-elect saying he looked forward to receiving the outgoing president’s “counsel”. 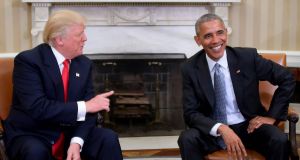 They were certainly bearing it but with only a little grinning. The prolonged handover of power between parties in US presidential politics is rarely pretty. Harry Truman did not like Dwight Eisenhower, Eisenhower did not like Jack Kennedy and Lyndon Johnson did not like Richard Nixon.

The first-ever one-to-one meeting between Donald Trump and Barack Obama on Thursday tested the new bounds of decorum in this White House ritual that marked the start of the handover of power.

It would really be something to be that White House fly on the Oval Office wall as the president and president-elect met. Talking alone, without advisers in the room, Trump and Obama faced off for the first time.

Here was a businessman who had questioned the president’s eligibility to have even been elected to the White House, meeting the man he is succeeding - who had challenged his own temperament and fitness to serve.

Just three days earlier, Trump was rubbishing Obama’s record, while Obama, campaigning for Trump’s Democratic opponent Hillary Clinton, was joking about the television celebrity’s lack of self-control on Twitter at a time when he was asking the American people to trust him with the nuclear codes.

Now, elected with the trust of 59.8 million Americans, Trump sat next to the US president, discussing domestic and foreign policy and plans for a handover of power, including those same nuclear codes.

Surrounded by a huddle of reporters amid the din of clicking cameras, the 44th president said that he wanted a transition to the 45th president that “ensures our president-elect is successful”.

Success for Trump, as he promised during his bombastic campaign, is dismantling the hard-won achievements of Obama’s presidency, among them his healthcare insurance act and his deal with Iran.

This perhaps explained Trump’s hangdog scowl as the president spoke. The whole encounter was strange and awkward, and the two men knew it, speaking carefully and tersely in remarks that lasted a little over three minutes.

“It is important for all of us, regardless of party and regardless of political preferences, to now come together and work together to deal with the many challenges we face,” said the outgoing president.

He said he was “encouraged” by their “excellent conversation.”

Trump, when he spoke, tried flattery, suggesting that they had only planned to meet for 10 or 15 minutes, but spoke for 90 minutes.

His campaign bile was gone. He had “great respect” for Obama, he said, and it was a “great honour” to meet him. He would even seek his counsel in future.

Trump referred, bizarrely, to “some of the high-flying assets” Obama mentioned during their private meeting. Perhaps these were the insults they threw at each just days earlier.

As the press were ushered out, Obama schooled Trump in how to deal with the departing reporters. Tapping his successor on his arm, he said: ‘This is a good rule: don’t answer any questions when they just start yelling.” Trump replied with a smile: “It’s always one last one.”

Good advice: amid the shouting, say nothing - something new for President-Elect Trump to learn and only 73 days to learn it.