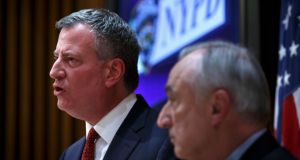 New York mayor Bill de Blasio (left) appealed for calm in the aftermath of the killing of two officers, who were gunned down as they sat in their patrol car. Photograph: Richard Perry/The New York Times

New York mayor Bill de Blasio sought to ease tensions with the city’s police force on Monday, calling for a suspension of protests against the use of excessive force until after the funerals of two officers shot dead in an ambush.

Mr De Blasio, a Democrat who has come under intense criticism from some police unions for his handling of protests over police killings of unarmed black men, asked the city to stand by families of the officers who were killed on Saturday in Brooklyn.

“It’s a time for everyone to put aside political debates, put aside protests, put aside all of the things we will talk about in due time,” said the mayor in a speech to a charity with close ties to the New York Police Department. “Let’s comfort these families . . . then debate can begin again.”

Police commissioner William Bratton said the heads of the city’s five police unions had agreed to suspend any lobbying efforts tied to the protests until after both officers, Rafael Ramos (40) and his partner, Wenjian Liu (28) are buried.

“We can then continue the dialogue that has begun over issues and differences that exist,” the commissioner told reporters.

“Is a vigil a protest? Is a rally?” asked Sharpton, calling the mayor’s comments “an ill-defined request”.

Rev Sharpton, who has denounced the slaying of the officers as they sat in their patrol car, said he would not change planned prayer vigils at the scene of Garner’s death and elsewhere in the city over the coming days to mark the family’s first Christmas without him.

Mr De Blasio had sympathized with protesters who took to the streets after grand juries declined in the last few weeks to charge white officers in the deaths of Brown and Garner.

The mayor was elected last year on a promise to advance civil rights after two decades of his predecessors emphasising law and order policies that helped the most-populous city in the United States shed its reputation for violent crime.

Mr De Blasio’s tensions with some unions in the nearly 35,000-member NYPD is the biggest crisis of his young mayoralty.

Investigators said they had recovered one photograph of the gunman, identified as Ismaaiyl Brinsley, attending a protest against excessive police force at New York’s Union Square Park. They said Brinsley, who was black, made “anti-police” comments online.

Since the attack, the NYPD has received several “copycat kind of threats”, said Mr Bratton, though none have been substantiated.

Several police officers turned their backs on the mayor in protest when he arrived at the Brooklyn hospital where the two officers were taken after they were shot. The police union said the mayor had blood on his hands.

Mr Bratton earlier told NBC’s Today show that he considered it inappropriate for police officers to turn their backs on the mayor. He said labour talks and pension concerns were fuelling their discontent.

But, in a press conference with the commissioner, Mr de Blasio said the attack should not be tied to the recent protests, which in New York have been largely peaceful.

“You have people who are trying to work for a more fair society. Anyone who does that non-violently, I respect that. I respect our men and women in uniform. Those are not contradictory thoughts,” said Mr de Blasio.

The mayor and police commissioner earlier on Monday visited the families of both men.

The grand juries that investigated the killings of Brown and Garner found that the police officers involved broke no laws. On Monday, a Milwaukee prosecutor said that a police officer would not be charged for the April fatal shooting of a black man.

The officer in the Milwaukee shooting, who like the officers in Ferguson and New York incident was white, was fired in October for failing to follow police procedure. (Reuters)