At least eight people were killed in what New York City Mayor Bill de Blasio said appeared to be a "cowardly" terrorism attack on Tuesday when a pickup truck drove at high speed down a bike path in Manhattan. Video: Reuters 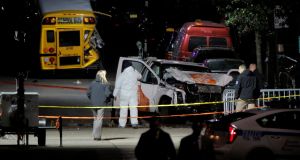 Police investigate a pickup truck used in an attack on the West Side Highway in Manhattan, New York. Photograph: Reuters 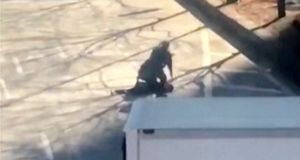 An image from a video shows the suspect in a deadly attack being apprehended by police. Photograph: YouTube/Tawhid Kabir 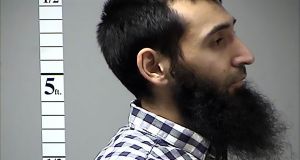 An Uzbek immigrant accused of a deadly truck attack on a New York cycle path has been charged with providing material support to a terrorist group and violence and destruction of motor vehicles.

Suspect Sayfullo Saipov (29) was charged on Wednesday in a criminal complaint following the Tuesday afternoon attack that killed eight people near the World Trade Centre memorial.

He appeared in the New York federal courthouse in a wheelchair, handcuffed and with his feet shackled, and was ordered to be detained. His lawyers said they were not seeking bail, and Saipov did not enter a plea. A judge set his next court date for November 15th.

Federal prosecutors say he was “consumed by hate and a twisted ideology” when he attacked people on the cycle path on Tuesday. He is charged with providing material support to the Islamic State terrorist group.

Prosecutors say Saipov was stopped by a “brave” police officer, who shot and wounded him. They say he had been planning the attack for months

The FBI says another person wanted for questioning over the truck attack that left at least 12 people injured has been located, though no details were provided on where the man was found or why he was wanted.

The FBI on Wednesday issued a wanted poster for Mukhammadzoir Kadirov, a 32-year-old native of Uzbekistan.

US law enforcement officials, who spoke on condition of anonymity, separately said Saipov had been in contact with Kadirov and one other person prior to the attack.

Kadirov was located after the wanted poster went out, William Sweeney, assistant director-in-charge of the New York FBI office, told a news conference later on Wednesday.

The authorities said Saipov watched Islamic State videos on his mobile phone and picked Halloween for the attack because he knew more people would be out on the streets.

Afterwards, as he lay injured in hospital, he asked to display the flag of Islamic State, also known as Isis, in his room and “stated that he felt good about what he had done”, prosecutors said in court papers.

Saipov left behind knives and a note, handwritten in Arabic, that included Islamic religious references and said “it will endure” — a phrase that commonly refers to Isis, FBI agent Amber Tyree said in court papers.

Questioned in his hospital bed, Saipov said he had been inspired by Isis videos and began plotting an attack about a year ago, deciding to use a truck about two months ago, the agent said, adding that he even rented a truck on October 22nd to practise making turns.

The alleged perpetrator of Tuesday’s attack appeared to “have followed almost exactly to a T the instructions that Isis has put on its social media channels”, John Miller, deputy commissioner of the NYPD, said at a news conference on Wednesday.

Saipov had never been investigated by either the FBI or the New York police intelligence unit, Miller added.

“But it appears he will have some connectivity to individuals who were the subject of investigations,” he said.

“He did this in the name of Isis.”

The attack was described by police as an isolated incident.

It was not clear when Saipov, who had entered the country in 2010, was radicalised, Mr Miller said.

He said authorities were interviewing family members, friends and associates of Mr Saipov, but could not offer further details as they investigate the deadliest attack in New York since September 11th, 2001.

Police said the rental truck with a Home Depot logo on the side struck several people as it entered a bike and jogging path that runs nearly the entire western length of Manhattan, about eight blocks north of Chambers Street in Lower Manhattan, at 3.05pm local time.

The truck continued south until it hit a school bus, after which the driver got out, armed with a paintball gun and a pellet gun.

The driver then shouted “God is great” in Arabic, police said, and was shot in the abdomen by a nearby duty officer and taken to hospital.

Mr Miller noted that, in the wake of such attacks, police often see a rise in hate crimes targeting Muslims.

“This isn’t about Islam, it’s not about what mosque he attends – there are hundreds of thousands of law-abiding Muslims in New York City who are adversely affected by things like this,” he said. “Anybody behind those will be prosecuted to the fullest extent of the law.”

Uber confirmed late on Tuesday that the suspect was one of its drivers. The ride-hailing service said Saipov had passed a background check to become a driver. It was offering its full assistance to law officials and was reviewing the driver’s history with the company.

Daniel Nigro, commissioner of the Fire Department of New York, said that there were 20 victims of the attack. Six were pronounced dead at the scene, while two more died in hospital. Of the eight dead, five were Argentinians in town to celebrate their 30th reunion as students of the Polytechnic College of Rosario north of Buenos Aires. Another victim was Belgian, and the other two were Americans.

The incident came ahead of the city’s annual Halloween parade, which drew thousands of people to Lower Manhattan on Tuesday night.

There was a heavy police presence, with additional officers on duty across the city, including heavy weapons teams and vehicles blocking the parade route. Mayor Bill de Blasio and governor Andrew Cuomo – both Democrats who have a frosty relationship – led the parade in a sign of unity.

At the press conference, Mr de Blasio said the New York City Marathon will continue as planned on Sunday, with additional security measures in place to protect the 50,000 runners and 2 million spectators who come out to watch the race in all five boroughs.

“Do what you do best,” the mayor said. “Be New Yorkers, be strong, be proud, be resilient – show the whole world right now that we will not be moved by terror.” – Copyright The Financial Times Limited 2017; additional reporting PA