Attacks in New York City since 9/11

Big Apple a repeated target for terrorists since 9/11 attacks 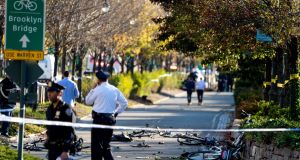 Bicycles and debris lay on a bike path after a motorist drove onto the path near the World Trade Center memorial, striking and killing several people Tuesday, Oct. 31, 2017. (AP Photo/Craig Ruttle) 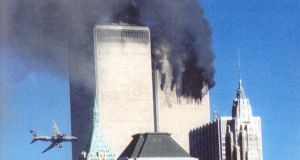 An attack in New York on Tuesday in which a man driving a pickup truck killed eight people and injured more than 12 others shook residents of the country’s most populous city. A suspect was shot by police and taken into custody after what authorities described as a terrorist incident. The following are some of the other attacks carried out in New York in recent years:

James Harris Jackson, a 28-year-old white man, stabbed Timothy Caughman, an African-American, multiple times with a sword in March. Caughman later died of his injuries and Jackson told police he travelled to the city from Maryland to kill black men.

Three bombs exploded in the New York area, two in Manhattan’s Chelsea neighbourhood and one in New Jersey, in September, wounding 31 people. Several unexploded bombs were also found. The suspect, Ahmad Khan Rahimi of New Jersey, was captured after a shoot-out with police. Rahimi, now 29, who was born in Afghanistan, was influenced by anti-American materials believed to be produced by Islamist militant group al Qaeda, prosecutors said.

Times Square was evacuated in May when a car bomb that failed to explode was found in a sport utility vehicle. Faisal Shahzad, a naturalised American and Taliban-trained militant, later pleaded guilty and was sentenced to life imprisonment.

An individual detonated a small pipe bomb in front of the US Armed Forces recruiting station in Times Square in March. There were no injuries.

On the morning of September 11th, members of al Qaeda flew two passenger planes into the north and south towers of Manhattan’s World Trade Center. The attacks, which involved a third plane that crashed into the Pentagon and a plane that crashed in Shanksville, Pennsylvania, killed 2,996 people and injured over 6,000 others. The death toll included some 2,600 people who were in the World Trade Center and on the ground in the subsequent collapse of the towers.