Neil Gorsuch sworn in as US supreme court justice 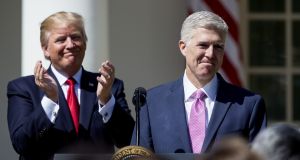 Newly sworn-in US supreme court justice Neil Gorsuch speaks as President Donald Trump looks on during a ceremony in the Rose Garden at the White House on Monday. Photograph: Eric Thayer/Getty Images

Neil Gorsuch, picked by President Donald Trump and confirmed by the Republican-led Senate, was sworn in as a US supreme court justice at the White House on Monday and was poised to have an instant impact on a court once again dominated by conservatives.

Mr Trump earned the biggest political victory of his presidency and fulfilled a major campaign promise when the Senate voted on Friday to confirm the conservative federal appeals court judge from Colorado to the lifetime job despite vehement Democratic opposition. With Mr Gorsuch aboard, the court once again has five conservative justices and four liberals.

Mr Gorsuch took his judicial oath in a White House Rose Garden ceremony with Mr Trump watching on, filling a vacancy that lingered for nearly 14 months after the death of conservative judge Antonin Scalia in February 2016. The oath was administered by Justice Anthony Kennedy, for whom Mr Gorsuch worked as a clerk as a young lawyer. Mr Gorsuch will become the first justice to serve alongside a former boss.

Under bright sunshine on a warm spring day in the US capital, Mr Trump hailed Mr Gorsuch as a man of great integrity and unmatched qualifications who was deeply faithful to the US Constitution.

“To the American people, I am humbled by the trust placed in me today,” Mr Gorsuch said, with his wife Louise and the Republican president standing behind him. “I will never forget that to whom much is given, much will be expected. And I promise you that I will do all my powers permit to be a faithful servant of the Constitution and laws of this great nation.”

All the other members of the court were at the ceremony, including liberal Justice Ruth Bader Ginsburg, who called Mr Trump “a faker” last year during the presidential campaign but later said she regretted the remark. Mr Trump at the time called on her to resign and said her “mind is shot”.

“He will decide cases not based on his personal preferences but based on a fair and objective reading of the law,” Mr Trump said of Mr Gorsuch.

During last year’s presidential campaign, Mr Trump said he would pick a justice who would overturn the landmark 1973 supreme court Roe v Wade ruling that legalised abortion. During his Senate confirmation hearing, Mr Gorsuch declined to answer questions about whether Roe v Wade and other important court precedents were properly decided.

Mr Gorsuch earlier in the day took his separate constitutional oath, administered by chief justice John Roberts, in a private ceremony at the supreme court with the other justices.

Mr Trump made Mr Gorsuch (49) the youngest supreme court nominee since Republican president George HW Bush in 1991 selected Clarence Thomas, who was then 43. Mr Gorsuch could be expected to serve for decades, and Mr Trump could make further appointments to the high court to make it even more solidly conservative, with three of the eight justices 78 or older: Ms Ginsburg (84); fellow liberal Stephen Breyer (78); and conservative swing vote Mr Kennedy (80).

Mr Gorsuch will take part in the court’s next round of oral arguments, starting on April 17th. They include a closely watched religious rights case on April 19th in which a Missouri church is objecting to being frozen out of state funds for a playground project due to a state ban on providing public money to religious organisations.

He is expected to take part in oral arguments in 13 cases during the court’s current term, which ends in June.

Mr Gorsuch can be expected to have an immediate impact of the court. He takes part on Thursday in the justices’ private conference to decide which cases to take up. Appeals are pending before the justices on expanding gun rights to include carrying concealed firearms in public, state voting restrictions that critics say are aimed at reducing minority turnout, and letting Christian business owners object on religious grounds to providing gay couples certain services.

Mr Gorsuch could also play a vital role in some cases on which his new colleagues may have been split 4-4 along ideological lines and therefore did not yet decide. Those cases potentially could be reargued in the court’s next term, which starts in October.

1 Parents jailed over female genital mutilation of daughter
2 The notorious Donald John Trump goes on trial
3 Gardaí may have to wait days to interview mother of McGinley children
4 Border on Brexit: ‘Europe will look after Northern Ireland’s interests’
5 McDonald and SF candidates sign pledge to be guided by ard chomhairle
Real news has value SUBSCRIBE