Relationship between US and China leaders warmer than early exchanges suggested 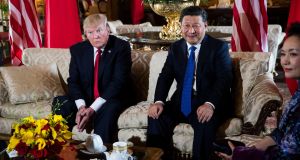 “Although the relationship between the two powers hung in an area of uncertainty when President Trump first took office in January, it is clearly now on the constructive path toward developing a co-operative bilateral relationship. A transition such as this has sent positive signals to the entire world,” the Global Times newspaper said in an editorial.

As expected, the two leaders did not play golf, although Mr Trump did hit the links on Sunday, but Mr Trump, who had tweeted earlier of the prospect of “very difficult meetings”, enthused about the “outstanding relationship” between the chiefs of the world’s biggest economies.

After the 18-hour summit, Mr Xi said the two men “got deeply acquainted, established a kind of trust and built an initial working relationship and friendship”.

Mr Trump’s decision to launch a missile attack on Syria during dinner with Mr Xi was not mentioned in the state media, which focused instead on footage of Mr Trump’s grandchildren, the children of White House advisers Ivanka Trump and Jared Kushner, singing Chinese songs and reciting Tang Dynasty poetry.

During the election campaign, Mr Trump criticised his predecessor Barack Obama’s decision to host a state banquet for Mr Xi, saying he would serve the Chinese leader a Big Mac, but in the end he pulled out all the culinary stops, dishing up Dover sole and dry-aged steak.

In the Communist Party’s main organ, the People’s Daily, the front page was dominated by a photograph of the two leaders on a couch at the Mar-a-Lago resort in Palm Beach, which showed a rather slumped Mr Trump and an alert, composed Mr Xi.

Showing a commanding pose by the Chinese leader is crucial for Mr Xi to underline his authority ahead of the 19th Communist Party congress in the autumn, a twice-a-decade event during which Mr Xi will cement his position as president, party secretary and head of the army.

North Korea’s rapidly improving nuclear programme and missile capabilities has significantly raised tensions and Mr Trump was keen to get China, an ally of North Korea since the 1950s, on board to help defuse the situation.

There was little detail on what the two leaders decided on their approach to dealing with the Korean nuclear crisis but, soon after the meeting, the USS Carl Vinson aircraft carrier was diverted to waters near North Korea and the Chinese government said it would send an envoy to South Korea to discuss issues on North Korea.

Mr Wang spoke of how the world was undergoing “great changes and adjustments unprecedented in a century” including the development of domestic and foreign policies of the new US administration and new circumstances in the European integration process, referring to Brexit.

During the summit, Mr Trump accepted Mr Xi’s invitation to visit China later this year, and the leaders agreed to keep in close contact through meetings, phone calls and letters.