US says Syria strike is ‘a message to other nations’ 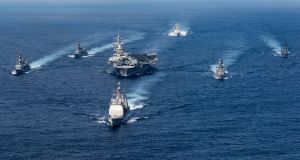 The Singapore-based USS Carl Vinson aircraft carrier and several smaller vessels sail towards the Korean Peninsula, amid concerns that Pyongyang could be preparing to launch a sixth nuclear test. Photograph: EPA

US secretary of state Rex Tillerson warned that the US military strike on Syria is a message to other nations, as US war ships headed towards waters near North Korea in a sign of escalating tensions between the two countries.

Amid concerns that Pyongyang could be preparing to launch a sixth nuclear test, US president Donald Trump ordered the Singapore-based USS Carl Vinson aircraft carrier and several smaller vessels to sail towards the Korean peninsula.

Mr Tillerson said that if other nations violate international norms and become a threat to others, “at some point a response is likely to be undertaken”.

“In terms of North Korea, we’ve been very clear that our objective is a denuclearised Korea peninsula.”

North Korea’s nuclear capabilities have moved to the top of the US’s foreign policy agenda, amid concerns that Kim Jong- Un is developing nuclear technology that could enable missiles to hit the US.

“This is a rogue regime that is now a nuclear-capable regime,” he said.

The US caught the international community off guard last week by ordering missile strikes on the Shayrat airfield in western Syria as a response to a chemical attack in a town in the Idlib province of the country.

The move risks antagonising both Russia and Iran who have backed Syrian president Bashar al-Assad in the six-year civil war.

Mr Tillerson is due to visit Moscow on Tuesday and Wednesday when he is expected to probe the issue of whether Moscow had prior knowledge of last week’s chemical attacks.

The gas attack in Syria suggests that chemical weapons still exist in the war-torn country, despite the previous US administration’s claim that most had been surrendered and neutralised.