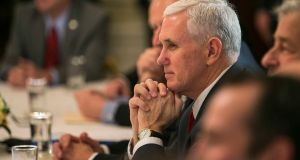 US vice-president Mike Pence: Irish officials see him as a potential ally in the Government’s campaign for immigration reform to help undocumented Irish in the USA. Photograph: Al Drago

US vice-president Mike Pence will be guest of honour at an Ireland Funds St Patrick’s Day dinner attended by Taoiseach Enda Kenny in Washington next month.

Mr Pence, whose grandfather emigrated to the US from Co Sligo in the 1920s, has accepted an invitation to be “honoree” at the annual $1,000-a-ticket event.

The news comes amid opposition calls for Mr Kenny to register Irish opposition to the new US administration’s immigrant ban by pulling out of the annual St Patrick’s Day shamrock ceremony at the White House. Mr Kenny has declined to say whether he will invite President Donald Trump to Ireland.

Ireland Funds chief executive Kieran McLoughlin confirmed Mr Pence’s attendance, saying the organisation’s committee wanted to honour a sitting vice-president with Irish roots and to use the opportunity to make the case for Ireland and the charities it funds.

“We are an avowedly bipartisan, non-political organisation, and that is evidenced by the fact that last June we recognised [then vice-president] Joe Biden at our event in Dublin,” Mr McLoughlin said. He said previous honorees at the St Patrick’s Day dinner included Bill and Hillary Clinton, House Speaker Paul Ryan and senators John McCain, George Mitchell and Tim Kaine.

Mr McLoughlin said Irish America reflected “the broad range of opinion that exists within the United States”, and that members of congress from both parties would be attending the March 15th dinner in Washington.

Mr Pence, a devout Christian and staunch conservative, has been an unwavering opponent of abortion and has a long record of opposition to gay rights. As governor of Indiana, he oversaw the introduction of some of the most sweeping anti-abortion restrictions in the US and signed into law a Bill that made it legal for businesses to refuse service to gay people.

Irish officials see Mr Pence as a potential ally in the Government’s campaign for immigration reform that would help tens of thousands of undocumented Irish in the US. As a congressman, Mr Pence angered some conservatives by advocating a compromise deal which would have required undocumented immigrants to “self-deport” and then come back into the US legally if they had a job.

Mr Pence said his interest in the immigration debate sprang from the experience of his grandfather, Richard Michael Cawley, from Tubbercurry, Co Sligo, who arrived at Ellis Island in 1923.