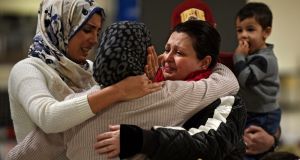 An Iraqi family from Woodbridge, Virginia, welcomes their grandmother at Dulles International Airport in Sterling, Virginia, against the backdrop of a simmering travel ban. Photograph: Astrid Riecken

Controversy over US president Donald Trump’s executive order halting immigration from seven countries has deepened after a ruling from a federal judge on Friday resulted in the ban being lifted, prompting a furious reaction from Mr Trump.

An initial appeal launched by the Trump administration was rejected by the ninth US circuit court of appeals in San Francisco on Sunday morning, with the justice department due to issue a counter-appeal by Monday afternoon.

Speaking to reporters after the appeal was launched on Saturday evening from his Mar-a-Lago resort in Palm Beach, Florida, Mr Trump expressed confidence the appeal would be upheld. “We’ll win. For the safety of the country, we’ll win.”

But he attracted widespread criticism for publicly criticising federal judge James Robart, who ruled on Friday that the travel ban was unconstitutional, prompting the department of homeland security to lift the ban, effectively reinstating approximately 60,000 visas.

“The opinion of this so-called judge, which essentially takes law enforcement away from our country, is ridiculous and will be overturned!” Mr Trump tweeted on Saturday.

He later tweeted: “When a country is no longer able to say who can, and who cannot , come in & out, especially for reasons of safety &.security - big trouble!”

Welcoming Friday’s decision, Washington state attorney general Bob Ferguson said: “The constitution prevailed today. No one is above the law – not even the president.”

Judge Robart had upheld a case taken by the attorney generals of Washington and Minnesota.

The ruling led to a rush of people coming into the United States over the weekend after the department of homeland security instructed customs officials to lift the temporary ban. The department reversed its cancellation of visas for the seven affected countries – Libya, Somalia, Iraq, Sudan, Syria, Iran and Yemen – on Saturday as people sought to enter the country before the ban could be reinstated.

Mr Trump’s executive order on January 27th banning refugees and halting migrants from seven, mostly Muslim, countries had led to widespread confusion at airports across the world, with large numbers of people prevented from boarding flights to the United States.

With lawyers for the department of justice to set out the full terms of their appeal on Monday, a protracted legal battle is expected, with the case likely to reach the supreme court.

The clash between the president and the judiciary intensified over the weekend, with Mr Trump warning that “many very bad and dangerous people may be pouring into our country” as a result of the ruling.

Senior Democrats, including former presidential hopeful Bernie Sanders, accused Mr Trump of “increasing authoritarianism” in his criticism of the judiciary, while Senator Pat Leahy said it seemed as if Mr Trump “wants to precipitate a constitutional crisis”.

In an interview with ABC aired on Sunday, vice-president Mike Pence defended the president’s handling of the controversy around the executive order. “I think the American people are very accustomed to this president speaking his mind and speaking very straight with them,” he said.

There are concerns that the controversy over the travel ban and Mr Trump’s rejection of the ruling which overruled his executive order could impact on the looming battle over the president’s nominee for the supreme court, Judge Neil Gorsuch, with Democrats insisting that any supreme court nominee must be prepared to act independently from the president.

Protests continued in a number of cities over Mr Trump’s policies on immigration and LGBT rights, including in New York, Washington DC and Houston, though there were also counter-demonstrations in support of Mr Trump. Protesters descended on Mr Trump’s properties in Florida, where the president spent the weekend with his wife Melania.