Maureen Dowd: How did we go from Abraham Lincoln to a Sharknado reject?

Even if Joe Biden wins on Tuesday, it will not be easy to restore what has been lost 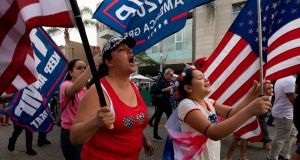 When I was growing up, my brother Michael took me to see old movies at the American Film Institute. An American in Paris. Shane. Mr Smith Goes to Washington. Casablanca.

The films shaped my image of America. We were Gene Kelly, the exuberant hoofer who could dance and romance better than the French. We were Shane, the laconic gunfighter who never used his gun unless he had to. We were Jimmy Stewart, the idealistic senator who fought the corrupt forces in our government. We were Humphrey Bogart, who pretended to be cynical when he was really a lovesick patriot. And there was the wonderful Jean Arthur in two of those movies, showing what a strong, saucy woman could do.

The nuns took us to new movies, like Lilies of the Field, where I learned that we were Sidney Poitier, the jack-of-all-trades who helped immigrant nuns in the Arizona desert build their dream chapel. We were the winners, the good guys. We had swagger and vitality and an endless sense of possibility.

America wasn’t perfect, God knows. I was raised here in the heart of the white patriarchy, where the Washington Monument was an apt symbol. But our aim was to brashly move forward toward a more perfect union. All that rhetoric about us being a mosaic and a quilt and a shining city on a hill and a beacon for the world? I bought it. I came from a family that wore uniforms – police uniforms, military uniforms – and growing up, I was proud of that.

I went to the Lincoln Memorial at dawn the day after Barack Obama’s inauguration. Maybe it was sappy. But after living through the ’68 assassinations and riots, Watergate, Vietnam and the Iraq War, I wanted to celebrate the idea that our sense of possibility was back, that we could be proud, smart and respected again in the world.

I imagined traveling to France on President Obama’s press plane and watching him come down the stairs, with his cool sunglasses and graceful lope, showing the French, who had correctly scorned our stupidity and cozening on Iraq: Never mind Gene Kelly. Look what we’ve got now.

I often wonder how we got from that moment in only a dozen years, from my little Champagne celebration at the Lincoln Memorial to a state of such despair and jitters that we don’t even know if the president will use the supreme court, midwifed by Mitch McConnell, to purloin the election.

The most bizarre fact that sticks in my head is this: In 2015, Donald Trump was agonising over whether to go for the role as the president in Sharknado 3: Oh Hell No!, or to run for the actual presidency. How did we go from Abraham Lincoln to a Sharknado reject?

It is not only Trump’s fault. He is the Rosemary’s Baby of pernicious trends in this country over decades. I have seen a lot of Republicans use bigotry to lure racists, scare Americans and win the White House. But with Trump, it is more blatant because he cuts out the middleman. He doesn’t hand it off to capos.

For years now, image has replaced substance and achievement as a path to power. But Trump – aided by a soulless, rapacious Silicon Valley that keeps torquing up the algorithm for conflict and conspiracy – has relentlessly tried to obscure our ability to tell the true from the false.

Truth has been Balkanised. Social media and the former reality star have entwined to make cruelty and fake news central elements of the nation’s discourse. Who could have conceived of a president calling a vice-presidential candidate from the other party, a respected senator and groundbreaker for women, “a monster”?

This fog of fakery peaked with Covid-19, with Trump politicising the mask and turning Democratic governors and his own health officials into the enemy. “Trump has turned fact and decency into a partisan concept,” said CNN’s Jake Tapper. “So that journalists who are sceptical of both parties, and Republicans like Mitt Romney and Jeff Flake who are not total sycophants, become antifa to 35 per cent of the country, while all the other Republican lawmakers who know better sat back and let it happen.”

Walter Isaacson, the historian, observed, “What we have lost is the sense that we are one nation, all in this together. Donald Trump is the first president in our history who has sought to divide us rather than unite us. We will heal once he leaves, but the scar will endure.”

I know, because of my family, that all Trump supporters are not cult members or racists. But our conversations are harder. They are anti-abortion and anti-regulation and got the conservative supreme court they wanted. They see Trump as a man who has kept his promises, with a playful sense of humour.

But liberals feel that Trump has no humour and that they have lost their own. It’s exhausting to be this outraged all the time. Although the White House correspondents’ dinner was always pretty lame, even before President Trump put the kibosh on it, I learned a lot from hearing presidents deliver humorous speeches – or try to. I loved writing features about wacky aspects of White House power – like the national security official under Bush senior who got nicknamed “the Ferret” because of his ability to sprint across the Oval Office rug and jump into pictures with the president.

Carol Lee wrote an amusing feature for the Wall Street Journal about the little red fox that sashayed around the colonnade outside Obama’s Oval, a memory that Obama evokes in his new memoir. Journalists don’t write those kinds of funny, human stories about Trump and his enablers. The president’s spiral into lawlessness is too repellent – and frightening – to allow levity.

I checked back with Jon Meacham, the presidential historian, who marvelled to me in 2016 that it was “as though Trump blew up the science lab, exposing the raw nerve of America’s stream of consciousness”. He told me about a long Negroni-and-pizza lunch in the early Clinton years with his old boss, the legendary liberal editor of Washington Monthly, Charlie Peters.

“Charlie Peters defined intellectual honesty as the ability to say something good about the bad guys and bad about the good guys – to call them, in other words, as you saw them,” Meacham said. “Trump blew that up, and part of the restoration drama we need is a return to a semblance of this kind of reason-based politics.

“The Republican Party chose to abandon the entire Enlightenment project of evidence-driven reality sometime between the escalator and Covid, choosing a kind of Hobbesian total war of partisan, even cultish, passions rather than an ethos that would have been recognisable, at least in outline, by every president from FDR to Obama. A Biden presidency won’t bring the Kingdom of Heaven to pass, but it could, at its best, make America remotely rational again.”

Just as I found it hard to walk past the supreme court after the partisan travesty of Bush v Gore, I now find it hard to walk past the nest of vipers that is this White House. There have been sex scandals and family grifting before. But the pervasive immorality (kids separated from parents and put in cages, endless lies, siphoning government money for the Trump family business, people like Omarosa Manigault Newman and Stephen Miller running around), and the Republicans’ blind eye to it all, makes it hard to see the White House the same way.

“Unfortunately, what the Trump presidency has shown is how far someone with a lust for power and contempt for democracy can go within our system,” said Michael Beschloss, the presidential historian. “Never has the expression ‘Eternal vigilance is the price of liberty’ been more resonant. We have to go back to our founding period and demand of our government to be the best that it can be. Sadly, now when people say that, it’s almost with an unhappy, bitter laugh. But the founders did not say it with an unhappy, bitter laugh. They said it with hope and expectation, and we should, too.”

Even if Joe Biden wins, it’s not going to be easy to restore what has been lost, or to forge a new American identity. Fortunately, the younger generation is more tolerant, open and committed to justice. And taking the megaphone away from Trump will lower the volume of lies and incivility, even as he will most likely continue to be revealed as a fraud in investigations and lawsuits when he loses presidential immunity.

“It’s going to take a hell of a lot of work, not just by Biden but by all of us, to put our country back together,” said Leon Panetta, the former Obama defence secretary. “The only pillar of our democracy I haven’t wavered on is our sense of trust in the American people. Tuesday is going to tell me a hell of a lot about whether that sense is well placed.”

He muttered, “Dammit, I hope we never make that mistake again.” But we might. – New York Times