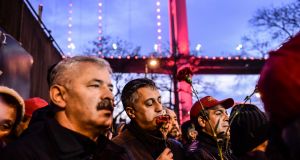 People gather for a minute of silence on Tuesday in front of the Reina nightclub in Istanbul, days after a gunman killed 39 people during New Year celebrations at the venue. Photograph: Yasin Akgul/AFP/Getty Images

Conflicting reports emerged on Tuesday night surrounding the identity and recent movements of a man suspected of killing 39 people at an Istanbul nightclub in the early hours of New Year’s Day.

According to various local media sources, the attacker, his wife and two children flew from Kyrgyzstan to Istanbul in November before settling in a house in the central city of Konya, 460km southeast of Istanbul.

The suspect then travelled on to Istanbul on December 29th where, according to newspaper reports, he began planning the attack that also injured 65 people.

Police involved in the manhunt, however, say the suspect may have entered Turkey through Syria.

Turkey and Syria share a 900km border that has, from the Syrian side, been controlled by various factions including the Islamic State terror group, which claimed responsibility for the attack, opposition rebels, Kurds and the Syrian regime.

Adding to the confusion of the three-day-old manhunt was the brief detention of Iakhe Mashrapov, a Kyrgyz businessman of a similar appearance to the suspect.

“They [Turkish police] explained that I was questioned because I slightly resembled the suspect in the photo. They apologised and let me board my plane,” he told the Turmush news agency on Tuesday.

Upon reaching the Kyrgyz city of Osh having returned from a trip to Istanbul, Mr Mashrapov was detained though later released by Kyrgyz security officials.

A further eight people were detained in Istanbul on Tuesday in relation to the attack, including two foreign nationals arrested while trying to leave the country at Ataturk airport.

Their phones, passports and luggage were taken and examined before the pair were later moved to police headquarters in central Istanbul.

It also appears that the assailant had previous knowledge of the nightclub’s layout and that the club’s security detail would not be armed.

According to testimony given by the taxi driver who took the suspect away from the nightclub, he spoke Turkish. Footage of him using a phone to film himself at a Christmas market in Taksim square was released on Tuesday.

The suspect’s wife, according to reports, says she had no idea her husband was a member of Islamic State, also known as Isis.

“I learned about the attack from the TV. I didn’t know that my husband was an Isis militant, let alone a sympathiser,” she was reported by the Hurriyet newspaper as having told investigators.

“We are committed to continuing operations beyond the border to the point where there is no harm to Turkey from terrorist organisations,” he said.

Turkish war planes have carried out multiple air strikes against Isis targets in Syria close to the city of al-Bab in retaliation to the Reina nightclub shooting, killing 18 extremists.

Islamic State has vowed to wage a war against the Turkish state.