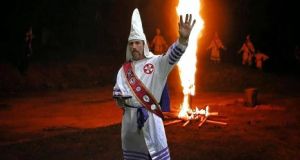 Frank Ancona, the professed leader of the Traditionalist American Knights of the Ku Klux Klan, was shot and killed last week in what law enforcement officials called a “tragic and senseless act of violence”.

His wife and stepson were charged over his death on Monday.

His body was found on a Missouri riverbank Saturday with gunshot wounds to the head, according to the Washington County coroner, Brian DeClue, who called the death a homicide.

In an interview, he said Mr Ancona (51) was killed with “a shotgun of some sort”. Jerrod Mahurin, the prosecuting attorney in the case, said Mr Ancona was also shot in the head with a 9 mm handgun.

On Monday, Mr Ancona’s wife, Malissa Ancona (44) and stepson, Paul Jinkerson Jr (24) were charged with a range of crimes in connection with the killing, including first degree murder and the abandonment of a corpse, according to the St Francois County Sheriff’s Department.

The sheriff said Mr Ancona was killed at his home Thursday, and his body was then left at a remote location. Mr Mahurin said he believed the killing happened because of a marital dispute and was not connected to Mr Ancona’s membership in the KKK.

Prior to the discovery of Ancona’s body, Malissa Ancona told police her husband had left the state on a delivery job. She said he planned to file for divorce when he returned.

Investigators said she tried to destroy blood evidence and altered the crime scene in an effort to conceal the killing, the Daily Journal reported.

The Washington County Sheriff’s Office said in a statement it learned of Mr Ancona’s disappearance Friday shortly before his vehicle was discovered on land owned by the US forest service.

His body was found on the banks of the Big River in Belgrade, Missouri, the next day by a family who had gone to fish.

In an interview with the New York Times this month, Mr Ancona said he had been a member of the Klan for more than 30 years. He formed the Traditionalist American Knights in 2009.

There are at least 29 separate, rival Klan groups active in the United States, and they compete with each other for members, dues, media attention and the title of being the true heir to the Ku Klux Klan, said Mark Potok, a researcher at the Southern Poverty Law Center, which tracks extremism in the United States.