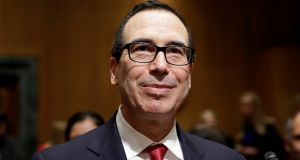 The US Senate voted to confirm Mr Mnuchin 53-47, with all but one Democrat opposing him over his handling of thousands of foreclosures as head of OneWest Bank after the 2007-2009 housing collapse.

At a White House swearing-in ceremony, Mr Trump said Mr Mnuchin would be a “great champion” for US citizens.

“He will fight for middle-class tax reductions, financial reforms that open up lending and create millions of new jobs, and fiercely defend the American tax dollar and your financial security,” Mr Trump said. “And he will also defend our manufacturing jobs from those who cheat and steal and rob us blind.”

Lawmakers, lobbyists and business groups have been nervously waiting for Mr Mnuchin to take office and fill in the many blanks on how he will pursue tax reform and handle delicate economic co-operation efforts with China, Mexico and other trading partners worried that Trump’s “America First” strategy will upend decades-old trade rules and currency practices.

Mr Mnuchin (54) provided no details of his plans as he was sworn in.

“I am committed to using the full powers of this office to create more jobs, to combat terrorist activities and financing, and to make America great again,” Mr Mnuchin said.

Mr Trump has pledged to roll back the stricter financial regulation under the Dodd-Frank reform law enacted after the financial crisis, pursue tougher trade policies on China and Mexico to reduce US trade deficits, and reduce business tax rates.

Mr Mnuchin faces immediate challenges with the March 15th expiration of a US debt ceiling suspension, ushering in the threat of a new default showdown, and a March 17th meeting of finance ministers from the Group of 20 major economies, where he will face tough questions about Mr Trump’s plans to increase trade protections.

In April, Mr Mnuchin will have to determine whether to declare China a currency manipulator as part of Treasury’s semi-annual currency report.

“There is a real open question as to whether this administration is going to cut itself off from international monetary cooperation, whether it’s exchange rate policies or attitudes towards multilateral institutions or international regulatory policy,” said Edwin Truman, a former treasury and federal reserve official now with the Peterson Institute for International Economics

Mr Mnuchin will quickly need to build a core management team to handle such challenges.

Mr Mnuchin, a second-generation Goldman Sachs banker who led the firm’s mortgage bond trading but left the bank in 2002, came under fire from Democrats over his investor group’s 2009 acquisition of another failed lender, IndyMac Bank, from the Federal Deposit Insurance Corp.

The bank, rebranded as OneWest, subsequently foreclosed on more than 36,000 homeowners, drawing charges from housing advocates that it was a “foreclosure machine.”

Mnuchin grew OneWest into Southern California’s largest lender and sold it for $3.4 billion (€3.2 billion) in 2015. He has also helped finance Hollywood blockbusters such as Avatar, American Sniper and The Lego Batman Movie.