Are prospects for Brexit backstop deal as promising as London suggests? 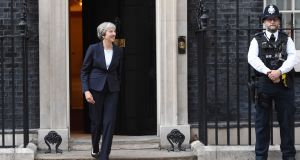 News reports have been hinting at a new flexibility on the part of EU chief negotiator Michel Barnier to give Theresa May a break on how to deal with the problem of maintaining a frictionless border on the island of Ireland. Photograph: Facundo Arrizabalaga/EPA

Another false dawn? Or are prospects for a Brexit backstop deal as promising as some in London suggest? Can this week’s Salzburg summit really see a breakthrough?

News reports have been hinting at a new flexibility on the part of EU chief negotiator Michel Barnier to give Theresa May a break, a new willingness, supposedly, to embrace British proposals on how to deal with the problem of maintaining a frictionless border on the island of Ireland.

But there’s a strong element of “pot-half-full-or-half-empty”, wishful thinking emanating from London, and a glossing over of the essential principle of the EU position – still firmly maintained by Barnier – that Northern Ireland will have to be treated separately from the rest of the UK. That it is a case apart.

That is what the UK has been resisting strenuously because of the implication, as the DUP sees it, of a “border” on the Irish Sea. The UK alternative is for the whole of the UK to maintain sufficient regulatory alignment with the EU to make separate treatment for Northern Ireland unnecessary.

The problem is that such a solution would entail serious “cherry picking” of EU single market rules, a prospect adamantly opposed by the EU 27. Except, they say, in respect of the “small” territory of Northern Ireland in the interest of safeguarding the peace process.

Barnier has for weeks been trying to “de-dramatise” the commission’s proposals to make its solution palatable and politically unthreatening to unionists by making it clear that the EU has no ambitions to change the constitutional position of the North.

He gave a lengthy explanation of his views on September 3rd at the Commons Brexit committee.

“We are ready to simplify these checks, to have them carried out at a number of different places and have checks, thanks to technical means, which could take different forms,” he told MPs.

Controls on the flow of goods or animals and animal products, don’t have to imply a political border, or be on a border, he said. They already exist on the Irish Sea for agricultural products.

And regulatory controls to ensure goods going into Northern Ireland comply with single market rules might happen at ports, on ships, or even at the factories where the goods are produced.

The commission has even embraced a willingness to look at British proposals, suggested last summer and known as “MaxFac”, or “maximum facilitation” as part of the solution – trusted trader schemes, technological monitoring of goods movements, and special arrangements for small, border businesses.

“Just to make that absolutely clear, we are not talking about a border. We are talking about controls. Some of these controls are already carried out in Northern Ireland on products coming from Great Britain. For example, plant-health checks, veterinary checks, animal checks.”

Among the reassurances apparently given to London, the Financial Times claims, is that they could all be handled by UK customs officials without requiring EU officials in tow.

Although the commission negotiating taskforce – and indeed the Irish, most vociferously – had previously insisted that the MaxFac measures would not be adequate to guarantee the integrity of the single market and police a UK-EU border regime, it appears that there is a willingness in Brussels to consider them as part of a Northern Ireland backstop solution.

The commission, in effect, is turning the tables on the UK, calling its bluff: “You like MaxFac? Fair enough. Now let’s try it out on our backstop . . . these are your proposals and they certainly minimise any requirement for a hard border. Which is what you say you want.”

But, critically, the commission remains adamant that its willingness to bend or circumvent single market rules can only apply to Northern Ireland. London still has to bite that bullet and shows no inclination to do so, and certainly not ahead of Thursday’s Salzburg summit. Irish officials, moreover, remain confident that the meeting will see, if anything, a reinforcing of the strong political support by the 26 for Ireland’s position.