Catalan president may declare independence in response to direct rule

The Catalan president, Carles Puigdemont, says the region will not accept Madrid's plan for direct rule describing it as the worst attack on Catalonia's institutions since General Franco's 1939-1975 dictatorship. Video: Reuters 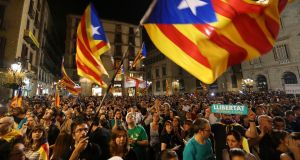 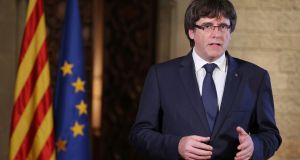 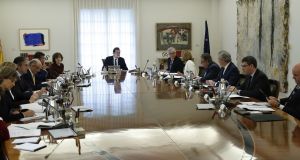 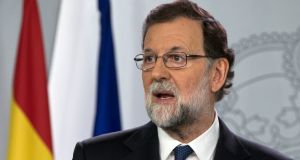 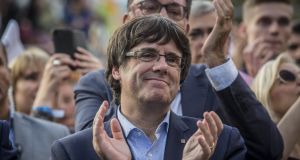 Catalonia’s presiden Carles Puigdemont is considering declaring independence or calling elections as a response to the imposition of direct rule in his region. Photograph: Bloomberg

The Catalan president Carles Puigdemont is considering declaring independence or calling elections as a response to the Spanish government’s decision to introduce direct rule in his region.

On Saturday, Spanish prime minister Mariano Rajoy said he was taking the unprecedented step of triggering article 155 of the constitution, allowing him to intervene in a region’s autonomous administration.

In this case, he said it was necessary to halt the Catalan government’s independence drive.

Under the aegis of that article, Mr Rajoy plans to remove Mr Puigdemont and the entire Catalan government from office and put their portfolios under the control of ministers in Madrid. He said he also wants elections to be held in the region within six months.

Hours after Mr Rajoy’s announcement, the Catalan leader described the move as “the worst attack on the institutions and people of Catalonia” since the era of the dictator Francisco Franco.

“If basic European values are at risk in Catalonia, they are also at risk in Europe,” he added.

Mr Puigdemont said he will call a session of the Catalan parliament during which it will decide how to respond to Madrid’s intervention. A date has not yet been confirmed for that session, although a meeting of Catalan party representatives is scheduled for Monday.

The Catalan leader issued a declaration asserting his region’s right to independence on October 10th, following a referendum on the issue which the Spanish government and judiciary said was illegal. The referendum overwhelmingly favoured secession although most voters who opposed independence did not take part.

However, Mr Puigdemont immediately suspended the implementation of his declaration, saying he wanted to negotiate with the Spanish government.

But no such talks have taken place and factions within the separatist movement want to see a more strident unilateral proclamation of independence, especially in light of the use of article 155.

The Popular Unity Candidacy (CUP), an anti-capitalist party whose support allows Mr Puigdemont to govern in Catalonia, has been particularly vocal in calling for an independence declaration.

CUP deputy Mireia Boya even suggested moving the Catalan government into exile in the south of France if direct rule is introduced.

Other factions within the Catalan government are reported to be against declaring independence, for fear of alienating possible international support and encouraging the exodus of companies, over 1,000 of which have moved their legal base out of the region in recent weeks.

The Spanish government takes its proposal to the senate this week, where it has the majority it needs to ensure article 155 is approved, possibly by Friday. The measures would then be in effect as soon as they are entered in the official register.

On Sunday, Spanish foreign minister, Alfonso Dastis the government was trying, “reluctantly”, to reinstate order in Catalonia following the referendum and called on people in the region to respect its decision.

“We are going to establish the authorities who are going to rule the day-to-day affairs of Catalonia according to the Catalan laws and norms,” he told the BBC’s Andrew Marr Show.

“I hope everyone will disregard whatever instructions [the current Catalan government] will be planning to give because they will not have the legal authority to do that.”

Mr Dastis also defended the Spanish police’s actions as they tried to halt the referendum even though other members of the government have already apologised for the violent scenes witnessed as officers raided polling stations, charged the crowds with batons and fired rubber bullets .