Move to change rules, from 60-40 majority to simple majority, could now be invoked 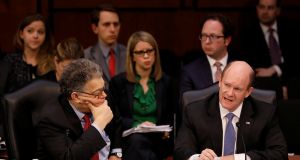 As Senator Al Franken looks on, Senator Chris Coons speaks during a meeting of the US Senate judiciary committee to discuss the nomination of Judge Neil Gorsuch to the supreme court. Photograph: Reuters/Aaron P Bernstein

The nomination of Neil Gorsuch to the US supreme court looks to be heading for a showdown in Congress as Democrats secured enough votes to block his appointment.

Confirmation by 41 Democratic senators that they will oppose President Donald Trump’s nominee for supreme court justice makes it increasingly likely that Senate majority leader Mitch McConnell will invoke the “nuclear” option later this week, which would allow supreme court nominees to be elected by a simple majority rather than the 60-40 majority currently required.

The move to change the rules concerning supreme court nominations has sparked concerns that the appointment of justices to the court could become increasingly politicised.

Mr Gorsuch, a 49-year-old judge from Colorado, was proposed by Mr Trump in January to fill the seat vacated by Antonin Scalia more than a year ago. But despite what was perceived as a relatively positive performance at his confirmation hearings last week, a majority of Democrats have vowed to oppose his nomination.

In part, many are still smarting from the Republicans’ refusal to consider President Barack Obama’s nominee to replace Scalia, Merrick Garland.

Confirmation by senator Chris Coons during a Senate judiciary committee debate on Mr Gorsuch’s appointment that he would not back Mr Trump’s nominee for the supreme court pushed the tally of Democrats prepared to block Mr Gorsuch to 41.

Addressing the committee on Monday, Mr Coons said he could not endorse Mr Gorsuch. “Throughout this process, I have kept an open mind . . . I have decided that I will not support Judge Gorsuch’s nomination in the judiciary committee meeting today,” he said, noting that he had met with the nominee twice, attended four days of confirmation hearings and received input from thousands of constituents.

While the Delaware senator said he would support a Democratic filibuster – effectively a move to delay a vote – he urged Republicans to find a solution and not to invoke the “nuclear option”. Among the possible outcomes is that Republicans agree to maintain the 60-40 rule in future. “It is my hope that we will work over the next two to three days to find a solution,” he said.

Senator Diane Feinstein, the committee’s top Democrat, who also confirmed her opposition on Monday, accused Mr Gorsuch of being “deluded with ambiguity” during his confirmation hearing, arguing that “one could not see where he stood even on big, long-established issues”.

Democrats fear that Mr Gorsuch would bring a conservative agenda to his judgments on issues such as abortion and gun control. But Mr Gorsuch insisted during his Senate hearing that he would implement the law independently, arguing that he leaves his “personal views” at the door.

Mr Gorsuch’s appointment would restore a conservative majority to the court. But with a number of the supreme court justices on the bench over 80 years of age, it is likely that Mr Trump will appoint at least one more justice to the nine-person court during his term as president.

The Senate judiciary committee debated the Gorsuch appointment on Monday ahead of a full vote which is scheduled to take place on Friday.

Meanwhile President Trump will travel to his Mar-a-lago estate on Thursday for two days of meetings with Chinese premier Xi Jinping with trade and foreign policy likely to top the agenda.

In an interview with the Financial Times, Mr Trump warned that the United States would be prepared to act unilaterally to eliminate the nuclear threat from North Korea with or without China’s help.

In the first of a series of meetings with foreign leaders this week, Mr Trump hosted Egyptian president Abdel-Fattah el-Sisi at the White House on Monday, reconfirming US support for its ally in the Middle East.