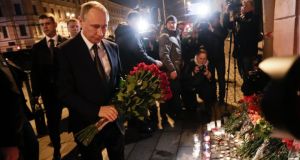 A deadly explosion on the St Petersburg metro was detonated by a suicide bomber whose body parts were found onboard the stricken train, Russian investigators said on Tuesday.

At least 14 people were killed in the explosion on Monday afternoon between the Sennaya Ploshad and Technichesky Institut stations in the heart of St Petersburg’s busy underground railway.

Russia’s investigative committee named the suspect as Akharzhon Djalilov, who was born in the city of Osh in south Kyrgyzstan in 1995 and had obtained Russian citizenship while working in St Petersburg.

“Conclusions of DNA tests and CCTV footage give investigators enough reason to presume that the man who committed the terrorist attack in the metro car was also the one who left the bag with the bomb at Ploshad Vosstaniya station,” the committee said in a statement on Tuesday.

Russia’s health ministry said 49 people were being treated in St Petersburg for injuries sustained during the blast. At least ten of the casualties were in an “extremely serious” but “stable” condition.

So far no organisation has claimed responsibility for the explosion.

Several thousand fighters from central Asia have joined the ranks of Islamic State, also known as Isis, to battle for control of large swathes of territory in Syria and Iraq. Russia, where migrant workers often face abuse and discrimination, is a fertile ground for Islamist recruiters, human rights activists say.

The Kremlin says it is on a mission to wipe out Islamic State in Syria and prevent rebels from Russia and former Soviet republics from returning to sew terror in their homelands.

Djalilov worked as a car mechanic in St Petersburg and also had a part-time job at a sushi bar in the city, according to Russian media reports. Colleagues spoke of him as a “quiet and steady” fellow who enjoyed sport in his free time.

Planning of the St Petersburg attack had likely involved more than one person, Dmitry Medvedev, the Russian prime minister, said on Tuesday. “There are always a large number of various enablers, all of them freaks engaged in brainwashing and in fact encouraging acts of terrorism,” he told reporters during a visit to Tambov region in southwest Russia.

Mr Medvedev called for extra checks on passengers using public transport, warning that Russia was at risk of further terrorist attacks. “We are at the forefront of the fight against international terror . . . and the fight must continue until the end because otherwise these kinds of events will happen more frequently,” he said.

Life in St Petersburg appeared to have returned to normal on Tuesday as investigators continued the gruesome task of identifying the bodies of those killed by the explosion.

Police in St Petersburg began rounding up migrant workers, including central Asians in the wake of the disaster. Human rights activists said the authorities would use the deadly explosion as a pretext to increase pressure on the migrant community.

US president Donald Trump telephoned Mr Putin on Monday to express condolences about the blast. The White House said the two leaders had agreed terrorism must meet a swift end.