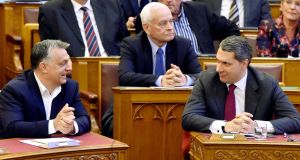 Hungarian prime minister Viktor Orban (left) and the head of the prime minister’s office Janos Lazar during a debate on the proposal to modify rules regulating foreign universities, in Budapest on Tuesday. Photograph: Zoltan Mathe/EPA

Hungary’s parliament has approved a law that may force the renowned Central European University to leave Budapest, in what critics of populist prime minister Viktor Orban call his latest attack on liberal institutions financed by billionaire George Soros.

Deputies passed the education Bill by 123 votes to 38, prompting opponents to call for a street protest on Tuesday evening in central Budapest.

Mr Soros founded CEU in 1991 in his birthplace, Budapest, as part of efforts to foster democracy, transparency and civil society in the former communist bloc. He funds NGOs in Hungary and the region that pursue the same goals and are also coming under increasing pressure.

Though he received a grant from Mr Soros in his student days, Mr Orban now accuses him of trying to undermine Hungary’s government and fuelling illegal migration, which the premier calls a threat to Europe’s security and identity.

Thousands of people protested against the government’s plans in Budapest on Sunday, the US state department has expressed concern and 150 US and European academics – including 14 Nobel laureates – wrote an open letter in defence of CEU, which now teaches 1,440 students from 108 countries.

Mr Orban insists the new law will close loopholes in education rules that allow CEU to “cheat” by awarding degrees recognised in Europe and the United States while not running a campus in the US, where it is registered.

The reform may force CEU to change its name and be subject to a new inter-governmental agreement between Hungary and the US – which could be problematic given Mr Soros’s fierce criticism of Mr Orban and US president Donald Trump.

While Mr Orban hailed Mr Trump’s election as the dawn of a new political era, Mr Soros called the US property magnate “a con artist and would-be dictator”.

Szilard Nemeth, the deputy chairman of Mr Orban’s ruling Fidesz party, said Mr Trump’s election created the “international conditions” for Soros-funded groups to be “swept out” of Hungary. Mr Orban, meanwhile, declared that 2017 “would be about squeezing out the forces symbolised by Soros”.

Mr Orban has denied trying to close CEU, saying: “Goodwill shall lead the Hungarian government and surely the government of the United States as well. Therefore there is no reason for anyone to be nervous.”

His allies in Hungary’s parliament fast-tracked Tuesday’s vote, ignoring a call from the US state department “to avoid taking any legislative action that would compromise CEU’s operations or independence”.

1 More than 30 people queue overnight to secure property in Carlow
2 Coronavirus: Further 430 cases reported in State is most in a day since April
3 Large sections of Garda to be disarmed following review
4 Covid-19: Possible extra restrictions for four counties to be decided by weekend
5 Trump paid no federal income taxes in 10 of past 15 years – report
Real news has value SUBSCRIBE