Paul Krugman: Donald Trump is wimping out on trade 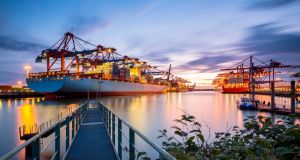 A few weeks ago Donald Trump whined: “Nobody knew that healthcare could be so complicated.” Now, one suspects, he’s saying the same thing about trade policy.

During the presidential election campaign, Donald Trump talked loudly and frequently about how he was going to renegotiate the United States’s “horrible trade deals”, bringing back millions of good jobs. So far, however, nothing has happened.

Not only is Trumpist trade policy – Trumptrade – nowhere to be seen in practice, there isn’t even any indication of what it will involve. So on Friday the White House scheduled a ceremony in which Trump would sign two new executive orders on trade.

The goal, presumably, was to counteract the growing impression that his bombast on trade was sound and fury signifying nothing. Unfortunately, the executive orders in question were, to use the technical term, nothingburgers.

One called for a report on the causes of the trade deficit; wait, they’re just starting to study the issue? The other addressed some minor issues of tariff collection, and its content apparently duplicated an act former US president Barack Obama already signed last year.

Not surprisingly, reporters at the event questioned the president, not about trade, but about Michael Flynn and the Russia connection. Trump then walked out of the room . . . without signing the orders. (US vice-president Mike Pence gathered them up, and the White House claims that they were signed later.)

The fiasco perfectly encapsulated what’s looking more and more like a failed agenda. Business seems to have decided that Trump is a paper tiger on trade. The flow of corporate relocations to Mexico, which slowed briefly while chief executives tried to curry favour with the new president, has resumed. Trade policy by tweet, it appears, has run its course.

Investors seem to have reached the same conclusion: the Mexican peso plunged 16 per cent after the election, but since Trump’s inauguration it has recovered almost all the lost ground.

Oh, and last week a draft proposal for revising the North American Free Trade Agreement (Nafta) circulated around Congress; instead of sweeping changes in what candidate Trump called the “worst trade deal” ever signed, the administration appears to be seeking only modest tweaks.

This surely isn’t what working-class Trump supporters thought they were voting for. So why can Trumpist trade policy be summarised – to quote Binyamin Appelbaum of the New York Times – as “talk loudly and carry a small stick”?

Let me give two reasons. First, back when Trump was railing against trade deals, he had no idea what he was talking about. (I know, you’re shocked to hear that.)

For example, listening to the tweeter-in-chief, you’d think that Nafta was a big giveaway by the United States, which got nothing in return. In fact, Mexico drastically cut its tariffs on goods imported from the US in return for much smaller cuts on the US side.

Or take Trump’s repeated claims that China gains a competitive advantage by manipulating its currency. That was true six years ago, but it’s not true now. These days China is actually intervening to keep its currency up, not down.

Talking nonsense about trade didn’t hurt Trump during the campaign. But now he’s finding out that those grossly unfair trade deals he promised to renegotiate aren’t all that unfair after all, leaving him with no idea what to do next.

Which brings me to Trumptrade’s second big obstacle. Whatever you think of past trade agreements, trade is now deeply embedded in the economy.

Consider the case of automobiles. At this point it makes little sense to talk about a US auto industry, a Canadian auto industry or a Mexican auto industry. What we have instead is a tightly integrated North American industry, in which vehicles and components criss-cross the continent, with almost every finished car containing components from all three nations.

Does it have to be this way? No. Slap on 30 per cent tariffs, and after a few years those national industries would separate again. But the transition would be chaotic and painful. Economists talk, with considerable justification, about the “China shock”: the disruptive effect on jobs and communities of the rapid growth of Chinese exports from the 1990s through 2007.

However, reversing globalisation now would produce an equally painful “Trump shock”, disrupting jobs and communities all over again. It would also be painful for some of the big corporate interests that, strange to say, have a lot of influence in this supposedly populist regime.

The point is that at a deep level Trumptrade is running into the same wall that caused Trumpcare to crash and burn. Trump came into office talking big, sure that his predecessors had messed everything up and he – he alone – could do far better. And millions of voters believed him.

But governing the United States isn’t like reality TV. A few weeks ago Trump whined: “Nobody knew that healthcare could be so complicated.” Now, one suspects, he’s saying the same thing about trade policy.