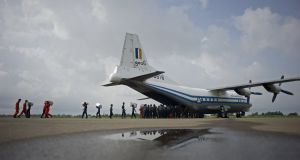 A Myanmar Air Force Shaanxi Y-8 transport aircraft, similar to the aircraft that disappeared on Wednesday afternoon. The plane was carrying relatives of Myanmar soldiers, including children, as well as 14 crew members. There was no immediate word on whether there were any survivors. Photograph: Ye Aung Thu/AFP/Getty Images

Searchers found bodies and debris on Thursday from a military transport plane that disappeared with 122 people on board shortly after taking off on Wednesday afternoon from an air base in the southern part of Myanmar, military officials said.

The plane was carrying relatives of Myanmar soldiers, including children, as well as 14 crew members, and there was no immediate word on whether there were any survivors. The plane was found in the Andaman Sea about 64km from Myeik Air Base on Thursday morning. The bodies of 10 people were found, military officials said.

The navy and air force had mobilised ships and planes to search for the aircraft in the area near the base, about 560km south of the country’s commercial capital, Yangon, said the office of senior general Min Aung Hlaing in a statement. The plane, a Chinese-made Y-8, was en route from the base to Yangon when it disappeared.

The weather in the area was bad, residents said, with pounding rain typical of the monsoon season that is now enveloping Myanmar. The death toll was likely to be the worst of any air disaster in Myanmar, a country that has a spotty air safety record. Before Wednesday, Myanmar had had 17 air crashes since 1988, most of them involving small passenger craft, according to the Daily Eleven, a privately owned newspaper. Last year, a Beechcraft trainer plane for the air force crashed near the capital, Naypyitaw, killing five people.

In the 17 crashes, 105 people were killed, the newspaper reported, citing the Aviation Safety Network. As the navy and air force searched the waters, local fishing boats spotted bodies floating about 30 miles offshore, said Kyaw Thet, chairman of the Dawei Fishing Association. Myanmar’s military plays an important political role in the country even as a civilian government, with Aung San Suu Kyi as its de facto head, has been in power since 2016. The army holds 25 per cent of the seats in parliament and controls three crucial ministries, including home affairs.

The missing plane had logged 809 flying hours, a statement on the military’s Facebook page said. The Y-8 is commonly used for transport, reconnaissance, and search and rescue. It has four propellers and is modelled on a Russian prototype, according to a description in the Chinese state news media.

A website specialising in assessments of air safety standards said the Y-8 aircraft was configured to carry a maximum of 96 soldiers or 82 paratroopers. The website, Globalsecurity.org, also said the plane could take 60 wounded soldiers and their stretchers.

The Chinese state-run company that sold the aircraft to Myanmar last year, China National Aero-Technology Import and Export, said in a statement on Thursday that it would provide “full support” in an investigation into the crash.

Local news media quoted Myanmar’s defence ministry as saying that in 2015, the air force had bought 29 planes and seven helicopters in the preceding four years, coinciding with an overall increase in military spending in southeast Asia. Aung Hlaing was quoted as saying that the spending was needed to keep up with other countries in the region.