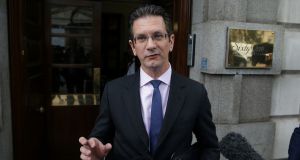 Steve Baker: “The Irish were asked twice, and by the time the Irish had been asked twice I was going through the roof.” Photograph: Getty Images

Within hours of the news that British and EU negotiators had agreed a draft withdrawal agreement, Conservative Brexiteers in the European Research Group (ERG) were meeting at Westminster to plan their opposition to it. Although the ERG is chaired by Jacob Rees-Mogg, its chief organiser is Steve Baker, a former aerospace software engineer who entered parliament in 2010.

Baker, who resigned as Brexit minister along with David Davis and Boris Johnson in protest against Theresa May’s Chequers plan last July, does not like what he hears about the deal being considered by the cabinet on Wednesday.

“What the prime minister is likely to ask us to support is not merely just imperfect. It is to put us into a position that is worse than EU membership; we’d have less of a voice, and it would be more difficult to escape from the same elements of the EU that control us and our economy now. It’s not just a grubby compromise we can put up with,” he told The Irish Times on Tuesday.

Baker’s success in organising the unruly group of Conservative Eurosceptics began before the Brexit referendum with Conservatives for Britain, and he helped to marshall MPs in support of the Leave campaign. He predicts that if May’s Brexit deal is put to a vote in the House of Commons dozens of Conservative MPs will vote against it.

“I don’t lie about the numbers. We’ve got 51 publicly on the record. We have at least another dozen who would come out against the deal.”

The deal also faces opposition from a small group of pro-European Conservatives, including Jo Johnson and Dominic Grieve, and the DUP could also join opposition MPs to vote against it.

For Brexiteers like Baker a defeat for the prime minister’s deal carries the risk that MPs could refuse to leave the EU without a deal and seek to delay Brexit or put it to a second referendum.

“I think everybody knows that if MPs could vote without having to face any consequences parliament would vote to remain in the EU. So is there a risk? Of course.”

Baker believes that if the cabinet approves May’s Brexit deal Britain will face a profound political crisis in the coming weeks. However, he is confident that most Conservative Brexiteers will not be persuaded to back the government with threats or cajoling from the whips.

“A number will. But the question is, will all of them? And the answer is no. You end up with political crisis. I don’t like it. I don’t want to be in this position. But the idea that Bill Cash after 30 odd years of campaigning on this issue at the last minute will capitulate because of a momentary political crisis is for the birds. There are newer intake MPs who are not going to accept an unacceptable deal either.”

Unlike some Conservative Brexiteers, Baker accepts the legitimacy of Ireland’s demand for a guarantee that there will be no hard border after Brexit. However, he rejects the backstop in favour of a standalone treaty guaranteeing frictionless trade across the Border, an option unacceptable to Ireland and the rest of the EU.

Although Baker is passionate about Brexit, he describes himself as a liberal internationalist who was “very pro-EU” before the debate over the Lisbon Treaty and Ireland’s decision to hold a second referendum on it.

“I feel so passionately about this. What matters more in politics than that democracy has meaning? What is the point of electing members of parliament if in the end on important matters that people care about they can’t decide what policy is? So in the end for me it is just fundamentally about democracy.”