Suppliers are being notified of shortcomings in first consignment from China, HSE says 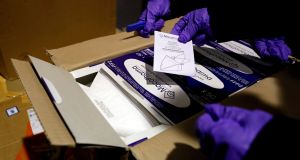 The Health Service Executive has admitted some elements of the first batch of personal protection equipment (PPE) imported from China this week “are not ideal” and suppliers are being notified of this – with the view to issues being resolved with subsequent orders.

It said it was satisfied that “an overarching framework agreement in place with China Resource Pharmaceuticals, which secures the primary line of PPE” would ensure the required quality of PPE for use by healthcare staff operating on the Covid-19 front line in hospitals.

In any event, HSE infection prevention and control clinical experts are undertaking product testing on all shipments received to assess quality and suitability for use, a HSE spokeswoman said.

“Any issues identified in the first batch received during this week are being fed back to be addressed in subsequent orders. Some elements of the first batch are not ideal but may be usable if an alternative supply is not available.”

Despite the challenges and volatility in the worldwide PPE market, the HSE had managed to secure a significant secondary line of supply “to ensure alternate product is available if and when needed”, she said.

Several European countries have rejected Chinese-made coronavirus testing kits and protective equipment as substandard in recent weeks. The Netherlands, Spain and Turkey have all claimed there have been problems with products including masks and tests.

While there is evidence of PPE shortages in Irish hospitals, including those working with Covid-19 patients and in other acute healthcare settings, there has been no indication of defective equipment.

Meanwhile, in response to a global shortage of reagents to enable Covid-19 tests to be processed, Ireland has sourced some of the chemical needed in China, HSE chief executive Paul Reid confirmed, but it has to be validated on arrival in Ireland.

Ireland, in common with every country globally, is facing significant challenges in sourcing PPE in an extremely competitive global market, the HSE said.

“In the midst of this unprecedented demand and supply shortage, Ireland has achieved what some major economies failed to do, which is to establish a number of confirmed supply lines for PPE, both internationally and through a scaling up of production for certain products in Ireland,” its spokeswoman added.

The HSE is distributing PPE across the system on a daily basis and has additionally engaged a third-party logistics and distribution company to support this process.

In an average year the HSE spends €15 million on PPE, in contrast with an initial budget of €208 million for PPE to tackle Covid-19, of which €60 million plus has been spent to date.

The Netherlands withdrew coronavirus equipment bought from Chinese suppliers after finding it to be defective. The ministry of health issued a recall of hundreds of thousands of face masks that had been distributed to hospitals, after finding flaws that made them ineffective barriers against the virus.

It came after Spain returned 58,000 coronavirus test kits made by Shenzhen Bioeasy Biotechnology after finding the tests were unreliable as they had only a 30 per cent accuracy rate.

The Chinese embassy in Spain indicated Shenzhen Bioeasy Biotechnology was unlicensed, and clarified that donations by the Chinese government and tech company Alibaba had not included their kits.

Turkey and the Philippines have also reported faulty coronavirus tests, without specifying the supplier.