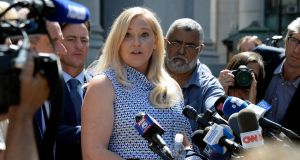 A woman who accused Jeffrey Epstein of forcing her to have sex with his powerful friends has denied a claim by allies of Prince Andrew that a notorious photograph of them together was faked.

Virginia Roberts Giuffre’s attorneys rejected the claim as a “troubling assertion” and reiterated a request to interview Prince Andrew about the late wealthy financier Epstein, who killed himself last month while awaiting trial on sex trafficking charges.

The photograph shows Prince Andrew with an arm around Roberts Giuffre’s waist. It is said to have been taken by Epstein at the home of his friend Ghislaine Maxwell during a visit to London in 2001, when Roberts Giuffre was about 17.

The image has dogged Prince Andrew since it was first published in 2011 by the Mail on Sunday, which paid Roberts Giuffre for the photograph and detailed her account of encountering Prince Andrew while serving as a travelling “sex slave” to his friend Epstein.

Last week, unidentified “sources close to” the prince were quoted by the Daily Telegraph and the London Evening Standard raising doubts about the photograph’s authenticity. They argued Prince Andrew’s fingers were “chubbier” than they appear in the picture and that he was taller than depicted.

But one of Ms Roberts Giuffre’s attorneys, Brad Edwards, has said the photograph is authentic and had not been altered.

Mr Edwards shared a letter addressing the claims that he and David Boies, another of Ms Roberts Giuffre’s attorneys, sent to Prince Andrew this week at the prince’s home in Windsor, following earlier remarks by the prince expressing sympathy for Epstein’s victims.

Mr Edwards wrote: “While your recent press statements indicate your sincere desire to help the victims of sexual abuse, we are concerned that certain statements attributed to you (which we hope do not reflect your actual views) are quite inconsistent with a desire to deal responsibly with the serious allegations that have been made.”

The letter read: “We now see, for instance, a troubling assertion attributed to you that a well-documented photograph depicting you, Virginia Roberts Giuffre and Ghislaine Maxwell in each other’s company is a ‘fake’.”

Mr Edwards reminded Prince Andrew that he had been asked by lawyers “to discuss the circumstances surrounding this long-held photograph” several years ago, during the course of civil legal actions brought against Epstein.

The letter read: “We were puzzled and, we must admit, disappointed that you did not cooperate at that time. Nevertheless, given your new attention to the subject and your pledge to cooperate, we renew our request for your cooperation.”

Ms Roberts Giuffre alleged in a December 2014 court filing that she was made to have sex with Prince Andrew among other friends of Epstein. The prince has always vehemently denied the allegation.

In 2015, a judge ruled that the allegations made by Ms Roberts Giuffre about the prince were “immaterial and impertinent” and ordered them to be struck out of a claim against Epstein.

Last month Prince Andrew accepted it was “a mistake and an error” to have continued seeing Epstein after the disgraced money manager pleaded guilty to soliciting prostitution from an underage girl.

But he insisted that at no time with Epstein did he “see, witness or suspect” behaviour relating to sexual abuse. He also reiterated his denials of any wrongdoing.

Epstein, who was 66, was found dead in his jail cell in New York last month. He was awaiting trial on federal charges brought more than a decade after his original plea deal with US authorities in Florida.

The plea agreement allowed Epstein to serve 13 months of an 18-month prison sentence, much of it on day release.

The deal had come under renewed scrutiny in recent months following a series of articles published by the Miami Herald. In addition to the new charges against Epstein, the renewed anger led Alex Acosta, the prosecutor who oversaw Epstein’s deal, to resign as Donald Trump’s labour secretary.

Meanwhile Prince Andrew has attended a ceremony marking the 75th anniversary of the liberation of Bruges, his first major international event since the scandal over his friendship with Epstein re-emerged.

The prince did not speak following the inspection of the guard of honour in the square. It is the duke’s most significant public engagement since his friend Epstein was found hanged in his cell on August 10th in New York.

The prince said in a statement on August 24: “At no stage during the limited time I spent with him did I see, witness or suspect any behaviour of the sort that subsequently led to (Epstein’s) arrest and conviction.”