Stocktake: Investors’ political leanings are distorting people’s view of the US market 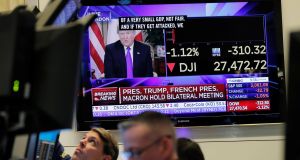 Just 25% of Democrat supporters knew stocks had risen this year, while 58% of Republicans did, according to a Financial Times poll. Photograph: Lucas Jackson/Reuters

Stocktake often cautions about mixing politics with investing, but a Financial Times poll confirms that all too many people allow their politics to colour their investment outlook. Just 25 per cent of Democrat supporters knew stocks had risen this year – a remarkably small number, given soaring equity markets are on course to enjoy their best year since 2013.

While political partisanship has increased under US president Donald Trump, this behaviour is not new. One 2012 study found investors become more optimistic about risk assets when the party they supported was in power. Democrats were slightly more optimistic than Republicans regarding the economy prior to 2000’s George W Bush-Al Gore election, the study noted, but there was a sudden turnaround in sentiment after Bush was declared the winner. Similarly, in the early months of Barack Obama’s presidency in 2009, 85 per cent of Democrats felt the recession-hit economy would improve over the following year, compared with just 50 per cent of Republicans. It’s long been clear that investors’ political leanings can distort their investment outlook, but the FT poll shows something more – politics can distort what people see, resulting in people thinking stocks have been going south when they have in fact been roaring higher.