‘Shut it down!’ Florida’s biggest migrant detention facility at centre of storm 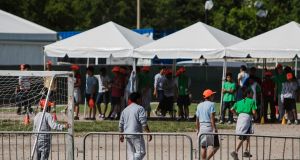 Leaving the sprawling metropolis of Miami and driving south, signs soon point towards Homestead. The small town about an hour south of Florida’s biggest city has found itself at the centre of national attention.

A series of events has pushed immigration back to the top of the political agenda. On Tuesday, a harrowing photograph of a dead man and his daughter emerged. Migrants Óscar Alberto Martínez Ramírez (25) and his 23-month-old daughter Valeria, from El Salvador, drowned in the Rio Grande as they tried to cross into the US from Mexico.

Earlier this week authorities were forced to move more than 200 children from a facility in Texas, after lawyers who were given permission to visit reported appalling conditions.

First-hand accounts of toddlers walking around without access to toothbrushes, soap and other basic needs such as nappies prompted a public outcry, though authorities moved 100 of those children back into the facility on Tuesday.

On this sweltering midweek morning demonstrators have gathered outside a similar facility in Homestead, a sprawling complex off an isolated road, surrounded by fencing and security. It’s not yet 10am but the sun is searing down.

Most of those gathered come here every day. But today there is an unusually high media presence. Elizabeth Warren, in Miami for the Democratic presidential debates, announced an impromptu visit to the site. As she arrives to cheers, Warren mounts a makeshift stairs along with a young Hispanic child, straining to see the dozens of minors in the yard behind the fencing.

“What is happening at Homestead to children – what is happening [as] the direct result of activities of the United States government – is wrong,” she says to cries of “shut it down!”

“It is a stain on our country. And we must speak out.”

Homestead is the largest child detention facility in the US. The centre was established during the Obama presidency with an 800-person capacity. But in its early incarnation it was used as a temporary shelter, with unaccompanied minors arriving to the United States held there for a short period of time before they were sent to US homes to be with parents or family members.

The facility closed due to a lack of need, but was reopened in 2018, and a private contractor hired to run the facility. It has since undergone two expansions, and has a capacity for more than 2,000 children.

Since the policy of familial separation at the border was introduced by the Trump administration last year, the facility has been in breach of the Flores agreement – a federal regulation that states that children can only be held at immigration detention facilities for a maximum of 20 days.

Local activists say that in some cases children are being kept for up to 150 days, in breach of the agreement.

The children staying at Homestead are typically aged between 13 and 17. Most arrived unaccompanied at the border, or were separated from their parents on arrival.

Despite President Donald Trump’s move to revoke his policy of family separation last year following public outcry, at least 700 minors have been separated from their parents since then, according to the American Civil Liberties Union (ACLU).

Debbie Waking, a mother and a grandmother who was born in Homestead, is one of those who has come to express her dissatisfaction with the administration’s immigration policy.

“Once you come here and looking at the kids at the other side of the fence and interact with them . . . it’s just heartbreaking,” she says.

Ken Barnes, a member of a grassroots human rights group in New Hampshire, has travelled to Florida to express his concern. “When we heard about children being held in prison-like conditions, we felt we need to be there, to raise our voices and bring some visibility to this tragedy,” he says, describing the Trump administration’s policy as “heartless”.

The country’s largest child detention facility is not the only manifestation of Florida’s immigration issue. The sunshine state – long a destination for Cuban and central American immigrants – is home to several detention facilities.

Directly north of Homestead is the Krome Detention Facility, run by the ICE (Immigration and Customs Enforcement) agency. Heavily armed guards man the entrance to the facility, which houses thousands of men who have been served their deportation orders.

Like Homestead, the prison-like structure is located on the outer edges of Florida’s urban sprawls, a half-hidden reminder of the reality of America’s immigration policy. It also has a link with Homestead – some of the minors who are held in Homestead are transported to Krome when they turn 18.

Florida’s immigrant community is on high alert. Last week Trump announced a raid on undocumented immigrants across the country, focusing on 10 cities including Miami, Houston, Baltimore and Chicago. He later announced he would delay the order for two weeks, to allow Congress to come up with a funding package.

Thomas Kennedy, political director of the Florida Immigrant Coalition, said the threat sparked alarm in Miami’s immigrant communities. “A tweet by the US president to deport millions of people – that causes mass panic, that causes chaos. We were answering calls throughout the week from people who were scared to leave their home, who were looking for alternative accommodation.”

He accuses the US president of using immigrants as leverage. “Basically he is using people as political pawns, political hostages in order to push through more of his immigration policies.”

On Tuesday, the House of Representatives voted in favour of a $4.5 billion emergency funding package to address the crisis at the southern border.

But in a sign of the political battle ahead the Senate passed its own, more restrictive Bill on Wednesday – a Bill that was immediately rejected by Democratic House speaker Nancy Pelosi. Both chambers must now agree on a compromise that the president will be willing to sign.

In the meantime, immigration is likely to surface as a central issue in this week’s Democratic primary debates in Miami.

But whether the current outrage, prompted in part by the terrible picture of the father and daughter that ricocheted across the world this week, will be enough to instigate a serious reform of American’s immigration system remains to be seen.