The man who allegedly housed the suspected ringleader of the Paris attacks is facing years in jail and a €90,000 fine if convicted of “sheltering terrorists”. Video Reuters 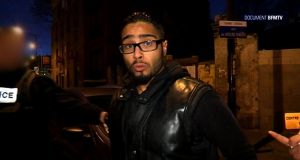 Jawad Bendaoud, the man who allegedly lent his Paris suburb apartment to the suspected ringleader of the attacks on Paris, during his arrest in Saint-Denis in November 2015. Photograph: AFP Photo/Getty Images/BFMTV

The first trial linked to the November 13th, 2015 jihadist attacks that killed 139 people in Paris opened on Wednesday. Two accused, Jawad Bendaoud and Mohamed Soumah, risk six years in prison and fines of €90,000 if convicted of “sheltering terrorists”.

A third defendant, Youssef Aït Boulahcen, is the brother of Hasna Aït Boulahcen and first cousin of Abdelhamid Abaaoud, the suspected ringleader of the attacks. He could be sentenced to five years in prison for “failing to denounce a terrorist crime”.

Hasna was killed in the police assault on a squat in the suburb of Saint-Denis on the morning of November 18th, 2015, along with Abaaoud. Abaaoud and Chakib Akrouh, who went on a shooting rampage at cafe terraces in northeast Paris, were also killed in the assault.

The trial will last three weeks, and has taken on huge proportions. There are six investigating magistrates. Five hundred survivors and relatives of victims are civil plaintiffs, represented by up to 140 lawyers. Only 12 of 150 journalists covering the trial can sit in the courtroom. Proceedings are transmitted by video-link to a nearby room for the others.

Life in the banlieues

The trial does not involve actual perpetrators, but is interesting for what it reveals about the parallel universe of the French banlieues, where a jihadist fugitive is not necessarily someone to be turned in. Bendaoud and Soumah are drug dealers and ex-convicts, not jihadists. Aït Boulahcen, the only practising Muslim of the three, is on trial not for what he did, but for his silence.

“This is not the trial of the century,” Gérard Chemla, a lawyer for civil plaintiffs, admitted. “Its importance has been exaggerated, mainly because of media interest.”

Attention has focused on Bendaoud, age 31. A colourful character who is part slum lord, part neighbourhood tough and part media celebrity, Bendaoud stunned television viewers on the morning of the police raid in Saint-Denis by confessing to being the “landlord” of the jihadist hideout. French media refer to that live television interview as Bendaoud’s “Warholian 15 minutes of fame”.

Bendaoud admitted he had “appropriated” the squat several weeks earlier by driving out its previous inhabitants. Wearing a black jacket and round eye-glasses, with his hair slicked back, Bendaoud said, “A buddy asked me to lodge his buddies. I said there weren’t any mattresses. He said, ‘It doesn’t matter. They just want water and a place to say their prayers.’ I was asked a favour, so I did a favour. I didn’t know they were terrorists.”

Bendaoud was arrested immediately, in front of television cameras. Meanwhile, police were firing 1,500 cartridges at the third floor hideout. Akrouh detonated his explosives belt and the floor collapsed, His body, and those of Hasna and Abaaoud, were found on the second floor.

Bendaoud’s performance made the “terrorist landlord” the butt of jokes on social media about Molotov cocktails and “the pyjama party at Jawad’s place”. Police and fellow prisoners call him “Century 21”, after the estate agents.

‘Even I find that suspicious’

Police recordings of Bendaoud’s conversations with his partner, Laura, seem to indicate he knew who his “tenants” were. “The guys come from Belgium, ” Bendaoud said. “They ask me which direction to pray to. They say ‘We’re tired. We want to sleep. We spent three hellish days. Here’s €150 for three days . . . Even I find that suspicious. There’s no toilet. There’s no water. And they pay €150?”

Soumah, who is African, is known as “Mouss”. He had provided drugs to Hasna Ait Boulahcen, who he described as “a sexy little Arab girl. How was I supposed to know she was crazy?” Soumah and Bendaoud had been in prison together. Soumah put Hasna in contact with Bendaoud when she was searching for a hideout for her cousin Abaaoud.

Police believe that Abaaoud and Akrouh intended to stage a suicide attack in the business district at La Défense, west of Paris. They had asked Hasna to buy two suits and two pairs of shoes. Judges originally charged Bendaoud and Soumah with “associating with terrorists with a view to committing crimes”.

The charges were downgraded because judges became convinced that, while the accused knew who they were sheltering, they had no knowledge of future attacks.

1 One hundred Irish retailers for all your online Christmas shopping
2 Des Bishop apologises to Traveller community for comments in interview
3 Miriam Lord: All test and no trace makes Jack and Heaven knows who else, a very ill boy
4 Gym owner plans to defy restrictions and open
5 Varadkar says ‘dumping’ contact tracing problem on GPs ‘unfair’
Real news has value SUBSCRIBE