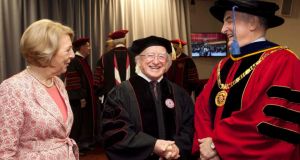 President Michael D Higgins urged new graduates at Indiana University, where he studied in the 1960s, to “challenge assumptions” and “guard against the arrogance of knowledge”.

Speaking on the second day of his five-day US trip, the President addressed 2,900 graduates and 35,000 guests at two graduation ceremonies in Bloomington, about 220 miles south of Chicago.

Mr Higgins warned graduates that “hubris, pride in false certainties, always brings dangerous consequences – the history of mankind is replete with such moments”.

The President said students all over the world “have to agitate yet again for pluralist teaching, of economics in particular, and of social sciences in general”.

Beneficiaries of education “must always base their intellectual endeavours on the values of curiosity, equality and respect, and must remain open to new ideas,” he said.

A recipient of a master’s degree in sociology from the university in 1967, the President referred to unequal consumption in the world, citing a 2009 World Bank report that showed the richest 10 per cent consume 60 per cent of the world’s resources, while the bottom 40 per cent consume just 5 per cent.

“A rich minority uses the equivalent of one and a half planets a year on consumption and waste. We cannot go on being consumed in our consumption,” he said.

The message of social science, when he studied the subject at Indiana University almost 50 years ago, suggested the removal of obstacles so that everyone on the planet could become “consumers of the developed world”, said Mr Higgins, and that this was “the sole path to prosperity”.

“Now the message, in humility, has to be that we must change, and that we can change,” he said at the university’s basketball arena, home to five-time national champions, the Indiana Hoosiers.

The President said he hoped the new generation of college graduates would be taking “the first steps in a new ethical version of economics, a subject restored to its original title of political economy, social sciences that are defined by craft, informed by wisdom as well as by contestable fact”.

Mr Higgins received a sustained standing ovation at the end of his first commencement address.

At the ceremony the President was conferred with an honorary doctorate from the college. Former US treasury secretary Paul O’Neill, another recipient of an honorary degree from the university, joked at a dinner last night about the pressure of making a speech on a stage with “an Irish poet”.

One of the largest universities in the United States, Indiana University has more than 110,000 students, including about 43,000 at the campus in Bloomington. The university’s class of 2014 includes graduates from 75 countries and 49 American states.

The President said he had intended to study for a doctorate at the university after 1967 but that he had to return to Ireland due to a family illness at home.

Recalling his arrival in the US, his first time in the country, Mr Higgins said he flew into New York and stayed the night at an inn where he was awoken by four men waiting to go on a night ship at the New York Times playing poker in the corner of his room.

“An inadvertent allocation of the poker room to an Irish migrant however created no problem whatsoever,” he said.

The President remembered taking a Greyhound Bus to Bloomington and the hospitality he received from people in Indiana “combined with a fascination with my accent – ‘just say something’”.

Mr Higgins returns to Chicago tonight and will meet members of the city’s Irish community tomorrow. On Monday he will attend an American Ireland Fund breakfast and meet Illinois Governor Pat Quinn.