Zoe Brock, a model from New Zealand, was 23 years old when she alleges she had to lock herself in a hotel bathroom to escape Hollywood producer Harvey Weinstein's unwanted sexual advances. Video: Victoria Derbyshire, BBC News 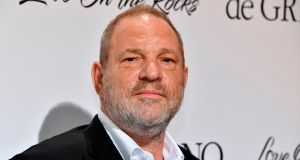 Police on both sides of the Atlantic have confirmed they are investigating Harvey Weinstein as the scandal surrounding the disgraced producer deepens.

In London, the Metropolitan police are assessing a sexual abuse allegation made against him, while in his hometown of New York police are carrying out a “review” looking for new complaints against him.

Scotland Yard said on Thursday: “The Met has been passed an allegation of sexual abuse by Merseyside police on Wednesday 11 October. The allegation will be assessed by officers from the child abuse and sexual offences command.” There is no indication the complaint relates to child abuse.

Lt John Grimpel of the NYPD said in a statement: “Based on information referenced in published news reports the NYPD is conducting a review to determine if there are any additional complaints relating to the Harvey Weinstein matter.”

Mr Weinstein has said many of the details of those public accounts are inaccurate, and he has denied accusations of criminal sexual harassment, rape and sexual assault.

On Tuesday, in a New Yorker article in which the three women claimed Mr Weinstein had raped them, Sallie Hofmeister, a spokesperson for Weinstein, said: “Any allegations of non-consensual sex are unequivocally denied by Mr Weinstein . . . With respect to any women who have made allegations on the record, Mr Weinstein believes that all of these relationships were consensual.”

In a statement issued on Wednesday in response to his wife’s decision to leave him following the allegations, Mr Weinstein said: “I support her decision, I am in counselling and perhaps, when I am better, we can rebuild. Over the last week, there has been a lot of pain for my family that I take responsibility for.”

And in video footage published on Wednesday, Mr Weinstein told reporters: “Guys, I’m not doing OK but I’m trying. I gotta get help . . . You know, we all make mistakes . . . second chance I hope.”

In March 2015, Filipina-Italian model Ambra Battilana Gutierrez accused Mr Weinstein of groping her breasts and putting his hand up her skirt during a meeting at his office.

She filed a complaint with the NYPD, and the next night met with Mr Weinstein again, supported by an NYPD undercover operation and while wearing a wire, according to the New Yorker, recording the producer appearing to confess to groping her.

The NYPD said it investigated a misdemeanour sexual abuse complaint against Mr Weinstein and the case was referred to the Manhattan district attorney’s office. The office decided not to file charges.

Separately, the Academy of Motion Picture Arts and Sciences, which hosts the Oscars, has said it will hold a meeting on Saturday to discuss the Weinstein sexual abuse allegations.

“The Academy finds the conduct described in the allegations against Harvey Weinstein to be repugnant, abhorrent, and antithetical to the high standards of the Academy and the creative community it represents,” the Academy said in a statement.

The British Academy of Film and Television Arts (Bafta) also announced it had suspended his membership, effective immediately.